The Swinomish Indian Tribal Community is enhancing native Olympia oyster beds with the hope of restoring the ecosystem they once supported.

Worldwide, 85 percent of oyster reefs have been lost, according to The Nature Conservancy, making them “the most imperiled marine habitat on earth.” Olympia oysters are sensitive to extreme temperatures, so Swinomish focused its efforts on the pocket estuaries at Lone Tree Point and Kukutali Preserve because the oysters would be constantly inundated and could avoid large temperature swings.

“Pocket estuaries are typically surrounded by salt marsh and have tidal channels, lower wave and current energy, and some freshwater input,” Barber said. “Our eventual goal is to establish self-sustaining populations of native Olympia oysters in these estuaries and ideally, in other areas around Similk and Skagit bays.”

Oyster larvae settle on and grow on adult shells or “cultch.” In 2012 and 2013, Swinomish staff distributed Olympia oyster seed set on Pacific oyster cultch, and in 2015, they planted individual oysters. All seed was bred from Fidalgo Bay broodstock.

Because the goal is for the oysters to spawn and self-seed, the tribe needs to know when reproductive activity typically occurs in each location. Fisheries staff monitored activity through spring and summer 2015, also collecting data on water temperature and salinity.

The research team used non-lethal methods to assess brooding status. Oysters were briefly dried out and inspected. A 5-millimeter-wide zip tie was used to gently sweep the inside of the mantle to extract larvae to determine the development stage. The oysters were then placed in a seawater bath before being returned to the pocket estuary.

“Our research clearly shows that Olympia oysters are capable of brooding at temperatures colder than 12.5 degrees Celsius (54.5 degrees Fahrenheit), which is what has been previously reported in the literature,” Barber said. “Furthermore, the presence of late-stage larvae in the mantle of brooding oysters indicates that larvae had successfully reached late-stage development approximately two weeks before 12.5 degrees was first recorded at Lone Tree.”

As a result of the findings, the team will put unseeded cultch in the lagoons earlier than expected.

“We need to make sure that all self-seeding efforts are in place by mid-April rather than the commonly accepted time period of mid-May,” Barber said. “That way, when the larvae are released, the shell is there waiting for them to settle on and grow.” 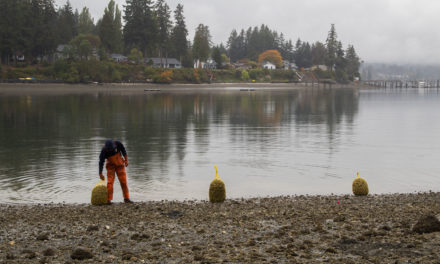 The Herald: Tribes, state will return to court over salmon