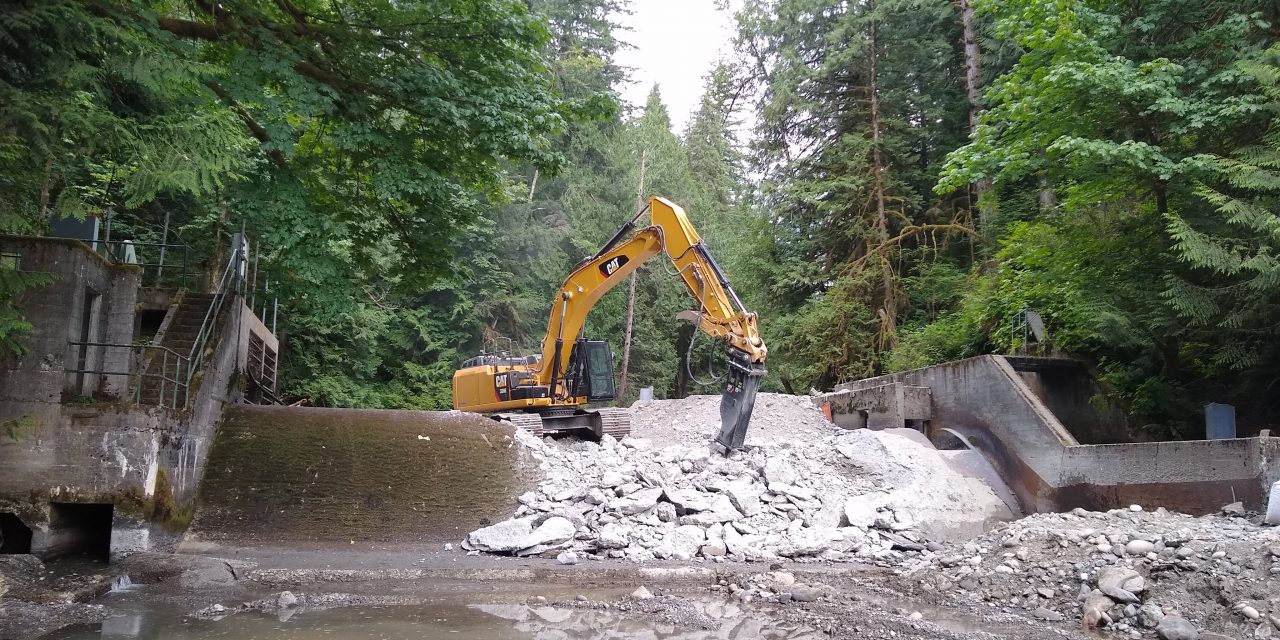 Two fish-blocking dams were torn down in the North Sound region over the summer, opening up pristine habitat for threatened salmon populations.

The Tulalip Tribes worked with the city of Snohomish to remove a dam on the Pilchuck River, while the Nooksack Tribe and Lummi Nation finally saw the demolition of the Middle Fork Nooksack River dam that should have come down years ago.

Both dams were built to provide water to nearby cities.

The original Pilchuck dam was built in 1912 southeast of Granite Falls. The 60-foot-wide, 10-foot-tall dam became obsolete after the city of Snohomish found it more affordable to get its water from the city of Everett. The city approached the Tulalip Tribes to partner in the dam removal, because of the tribes’ experience with permitting, funding and construction of salmon enhancement projects.

Removing the Pilchuck dam opened up salmon access to more than 37 miles upstream, which is one-third of the length of the mainstem.

“Upstream of the dam, the river is in a much more wild state,” said Brett Shattuck, Tulalip restoration ecologist. “There’s a lot better stream-adjacent conditions with trees, so it’s in a really good state.”

Stream-adjacent trees are an essential feature of healthy riparian habitat because they keep water temperatures cool and create pools where salmon can rest. Unfortunately, the Pilchuck dam prevented some fish from reaching that habitat.

The river is used by chinook salmon and steelhead, both listed species under the federal Endangered Species Act, as well as coho, chum and pink salmon, cutthroat and bull trout.

“For over 100 years, the waters of the Pilchuck were restricted by this dam, allowing only some fish to pass,” said Tulalip Tribal Chairwoman Teri Gobin. “The removal of the dam is a great step toward the ultimate goal of recovering salmon and sustaining tribal fishing culture for future generations.”

Meanwhile on the Nooksack River, the Nooksack Tribe and Lummi Nation have long advocated for the removal of the Middle Fork dam.

The 24-foot-tall dam was built southeast of Deming in 1961 to supplement the city of Bellingham’s water supply, which comes mainly from Lake Whatcom. The state law at the time required that fish passage be built, but dam construction was permitted without it, according to the conservation group American Rivers.

In 2002, the Nooksack Tribe and Lummi Nation, along with state co-managers, signed a memorandum of understanding with the city of Bellingham to restore fish passage in the Middle Fork. However, design efforts and feasibility studies stalled until 2017 when American Rivers became a formal partner, with funding provided by the Paul G. Allen Family Foundation. (The foundation also helped fund the Pilchuck dam removal.)

Thanks to those partners, along with Long Live the Kings, NOAA Fisheries and the city of Bellingham, the dam finally came down over the summer. A couple of dramatic explosions in July broke it into small enough pieces to be removed from the site.

“The Middle Fork dam removal project is a representation of decades of work and provides an opportunity to work together collaboratively to protect an area that is deeply rooted to our culture,” said Trevor Delgado, Nooksack tribal historic preservation officer.

A free-flowing river allows chinook salmon, steelhead and bull trout to access to 16 miles of cold, pristine spawning and rearing habitat in the upper Middle Fork Nooksack River. The city of Bellingham moved its water intake upstream and installed a screen to keep fish from being drawn into it.

“The habitat in the Nooksack basin will take decades to recover because there are many limiting factors that impact Endangered Species Act-listed (ESA) early chinook,” said Merle Jefferson, director of Lummi Natural Resources. “The habitat above the Middle Fork has potential and we hope that this project will provide more spawning habitat for the salmon, which are integral to our heritage and cultural identity.”

An excavator removes the Pilchuck dam piece by piece. Photo courtesy of the Tulalip Tribes.