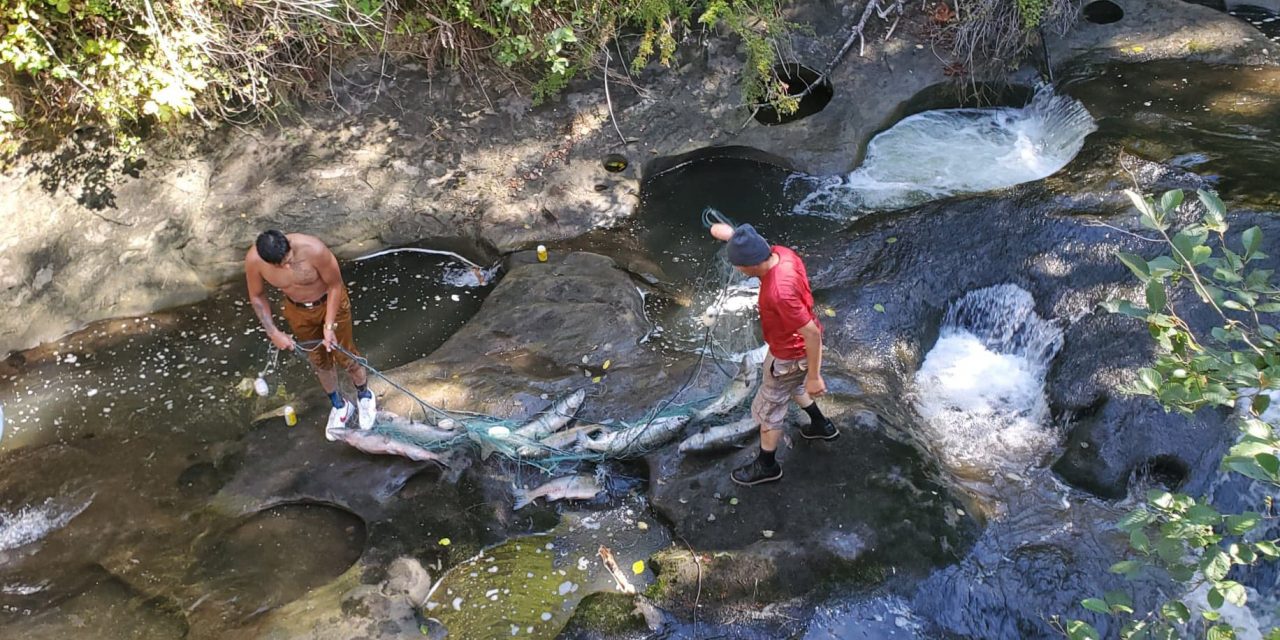 Lummi tribal fishermen harvested salmon from Whatcom Creek in August, for the first time in at least 100 years.

The chinook salmon were released as juveniles in 2017 from the Bellingham Technical College’s Fisheries and Aquaculture Science program’s hatchery, which works in partnership with tribal and state fisheries managers. When the chinook returned as adults, they congregated below the waterfalls in the creek beside the hatchery.

Whatcom Creek travels from Lake Whatcom through the city of Bellingham to Bellingham Bay, where a pulp and paper mill operated on the waterfront from 1926 to 2007.

“When they decided we could catch these fish for ceremonial and subsistence, my name came up, and they asked if I’d go fishing,” said Lummi fisherman Troy Olsen. “I said I’d love to do that.”

Olsen remembers being on the Lummi Fish Commission years ago and wondering why they didn’t fish in Whatcom Creek.

“A lot of our ancestors gathered there at that creek when Whatcom County was in its early stages of industry,” Olsen said. “I thought, the colonizers really impacted Whatcom Creek in a bad way. The toxic waste from the Georgia-Pacific mill really degraded the salmon habitat.”

Lost and degraded habitat is the main cause of declining salmon runs. To supplement populations until habitat can be restored, the Lummi Nation and state co-managers operate hatchery enhancement programs on the North and South Forks of the Nooksack River, Lummi Bay and the Samish River, as well as the new program at the Whatcom Creek Hatchery.

In 2017, some of the chinook spawned at the Lummi Nation hatchery on Skookum Creek were not suitable for release in the South Fork Nooksack River. Those fish were brought to the college’s hatchery on Whatcom Creek where they were released.

“There wasn’t any intention of having these fish spawn in the wild,” said Ben Starkhouse, Lummi harvest manager. “It was intended that these would be caught.”

A group of about 20 tribal members gathered by the creek in August, holding a small ceremony to pray for the safety of all fishermen, before setting a net in the creek.

“You may see a thriving community in this place you call Bellingham,” said Steven Solomon, chairman of the Lummi Natural Resources Commission. “For us it’s Whatcom. Home of the Noisy Water. It wasn’t just noisy over that fall, that water coming down. This creek was full of fish.

“Our great-grandfathers said there used to be upwards of 300,000 fish in this creek,” Solomon said. “They would make a set right here to feed the whole village. One set. Only took what they could use. That’s our way today. We only take what we could use and not drive it to extinction.”

After the Lummi fishermen harvested about 100 fish, an emergency rule change by the Washington Department of Fish and Wildlife provided a recreational fishing harvest opportunity until September 13.

“People forget Whatcom is a Lummi word,” Olsen said. “We need to remind them we’re still here. We have children; they have a future. They need to have a relationship with that place as much as anybody else.”