ARLINGTON (June 3, 2008) – The Stillaguamish Tribe has blessed the first arrivals of its developing buffalo herd.

The tribe purchased eight buffalo from the Yakama Indian Nation and plans to acquire seven more by the end of the year. The herd will primarily benefit the many members of the tribe who suffer from diabetes. They will receive the lean buffalo meat through the tribe’s diabetes program.

“With the high rates of diabetes in Indian Country, we decided to provide buffalo to our tribal members as a healthy alternative,” said Stillaguamish Chairman Shawn Yanity. “Salmon runs have declined and we don’t have access to deer and elk like we used to. Plus, many of our traditional plants, such as camas, aren’t readily available anymore.”

As the herd grows, tribal elders and low-income families will receive a share of the meat. Eventually the Stillaguamish Tribe could share the meat with neighboring tribes and make it available to the public.

The tribe conserved 56 acres of pasture to accommodate the herd, as well as protect the land from development. “We want to model for others how to preserve farmland while protecting wetlands at the same time,” Yanity said.

Raising buffalo also will benefit the tribe culturally, he added. “We can incorporate hides, bones, tails and hooves into our ceremonies and regalia.” 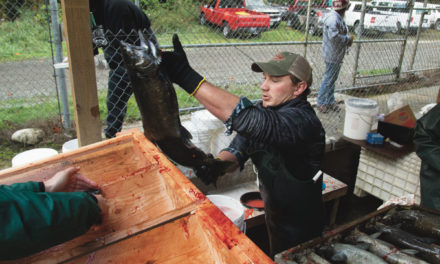