Being Frank: Working for Tomorrow Every Day

I am honored and humbled to follow in the footsteps of Billy Frank Jr. as chair of the Northwest Indian Fisheries Commission.

Of course no one can ever truly replace our longtime chairman and friend Billy Frank Jr. It will take all of us to do that.

Billy wrote this column for many years. The tribes decided to keep the name to honor him and remind everyone what this column is about: Frank, honest talk from the treaty Indian tribes in western Washington who are co-managers of the natural resources.

Like many people, I drew much strength from Billy over the years. But the biggest source of strength for me has always been my family, especially my parents.

My dad, Tandy Wilbur, was the first general manager of the Swinomish Tribe. He and my mother, Laura, worked tirelessly to secure the funding that founded the Swinomish tribal government. When he passed away in 1975 my mother continued their work. She went on to serve for 50 years in the tribal senate and was instrumental in tribal advances in housing and health care before her passing in 1997.

I started out in the fish processing business in 1970. It was hard work and long hours. I switched to fisheries management following the Boldt decision in 1974. I thought that maybe fisheries management might be a little bit easier than working 14-15 hours a day, seven days a week.

My dad told me that it would take about 10 years before the Boldt decision would operate as it should. There was a lot of fighting with non-Indian fishermen in the early days after the Boldt decision. You never knew what to expect when you went out on the water. It was 1982 before true co-management became a reality through development of the first joint Puget Sound Salmon Management Plan by the tribes and state.

As my tribe’s fisheries manager for 40 years, I’ve seen incredible advances in salmon co-management, both regionally and internationally.

I am especially proud of tribal involvement in developing and implementing the U.S./Canada Pacific Salmon Treaty that governs the sharing of salmon between the two countries. I continue to serve on the Fraser River Panel that manages sockeye and pink salmon through the treaty. I also continue to coordinate tribal participation in the North of Falcon fishery planning process with the state of Washington. I have served as an NWIFC commissioner for the past 30 years, most of them as vice-chair.

I love fisheries management. When we have a fishery opening – and salmon fishing is not open a lot these days – you see the happy faces of the tribal fishermen. You know you have done your job. I live for that. It’s my life.

We face many challenges in the years to come. Salmon populations continue to decline because we are losing habitat faster than it can be restored. As the resource continues to decline, salmon management becomes increasingly difficult because there is less room for error. That puts our tribal treaty rights at great risk.

We need hatcheries and habitat to bring back the salmon. We need hatcheries to provide salmon for harvest, support recovery efforts and fulfill the federal government’s treaty obligations. We need good habitat because both hatchery and wild salmon depend on it for their survival.

We also need to work together, because that is always best. We’ve known for a long time that cooperation is the key to salmon recovery, and that we must manage for tomorrow every day.

Stop the slow down to save Puget Sound 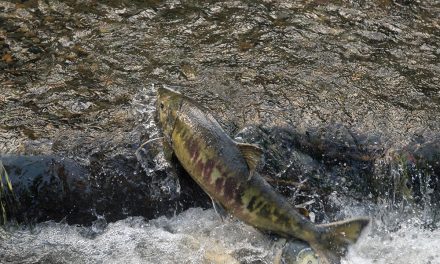 Being Frank: Drought, Water Quality on Many Minds