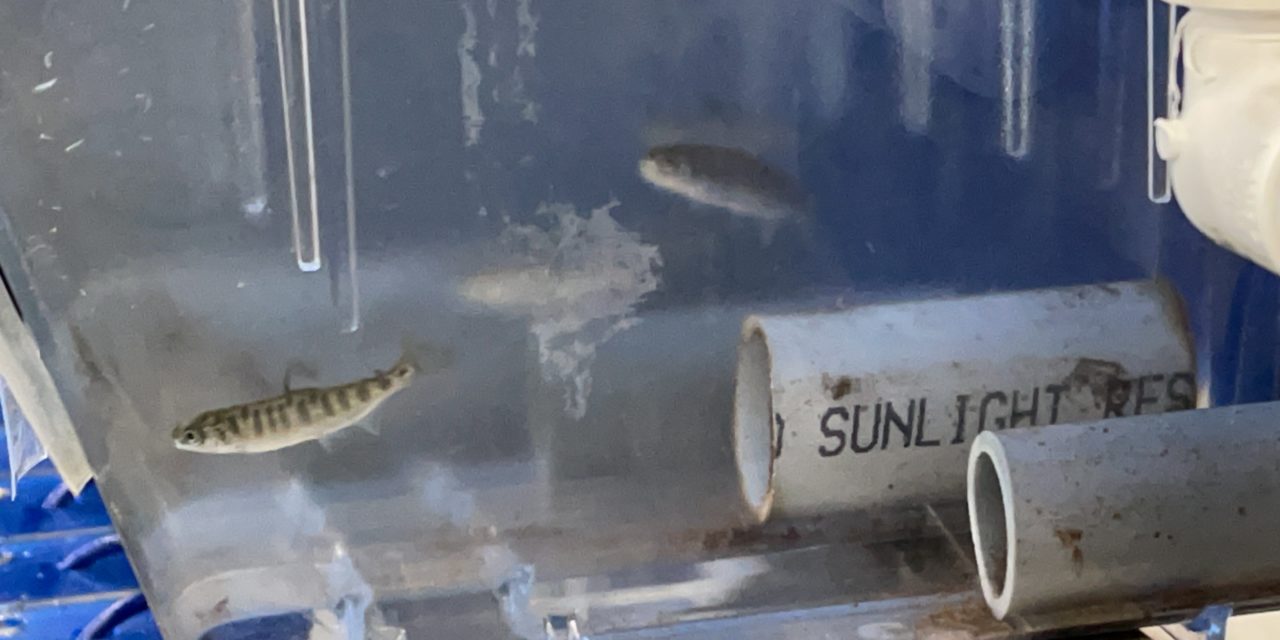 The chinook are part of a captive broodstock program the tribe started in 2010 to help recover the declining Stillaguamish River fall chinook run. Too few adult fish were returning to the river for the tribe to operate a conventional hatchery program.

“We tried and tried and tried to capture the adults, with only about 50 to 100 fish spread out over miles. We have a lot less access on the South Fork. It’s much more canyonized,” said Kip Killebrew, the tribe’s fisheries enhancement biologist. “So that’s why we had to catch the juveniles as they come out of the gravel and are getting ready to migrate downstream.”

The tribe’s natural resources staff collects juvenile chinook from the South Fork Stillaguamish River and raises them in a hatchery until they are mature enough to spawn. The goal is to bring back 900 fish each spring, and hope half of those are fall chinook, and not the genetically distinct summer chinook. The summer fish are part of a longer running hatchery program operated out of the tribe’s Harvey Creek Hatchery on the North Fork, where enough adult fish return to spawn.

At the Brenner Creek Hatchery, the newest arrivals are housed in individual condominiums until their DNA tests determine which run they belong to. The summers are returned to the river, and the fall chinook are moved to an indoor raceway.

As the fish grow, they are moved into circular tanks according to size, and ultrasounded when they reach three or four years old, to determine when they are ripe for spawning. Fertilized eggs are held in trays and fry are raised in raceways until they reach smolt size and can be fin-clipped and coded-wire tagged before release into the South Fork Stillaguamish River.

In May, the tribe clipped and tagged about 30,000 juvenile fall chinook before releasing them into the South Fork. When the fish return, the coded-wire tags give fisheries managers vital information about migration patterns and survival.

This captive broodstock program is modeled after a similar program on the South Fork Nooksack River that supplemented the spring chinook run until enough adults returned to the Lummi Nation’s Skookum Creek Hatchery. All of the fish released from Skookum Creek since 2017 have been spawned from returning adults, and not captive juveniles. In addition, some of the chinook spawned from captives have successfully spawned in the river and produced natural-origin offspring.

“We hope to get there within the next four to five years, start seeing enough adult returns from what we release out of the tanks and go back to just broodstocking the adults and not have to have a captive brood program,” Killebrew said.

Low returns of Stillaguamish chinook to both the South and North forks of the river result in fishing closures across the region to protect the weaker stock. The main reasons for the declines are degraded habitat and poor ocean conditions.

“There are questions of food limitations,” Killebrew said. “Ocean conditions that have been really bad – the blob, the son of blob – just really bad ocean conditions for survival. All those variables come into play.”