Anyone who has listened to the tribes at all over the years should not be surprised that we’re facing a severe drought this summer. We have been trying to tell people for years that this region is in the midst of a long-term drought. The water shortages and forest fires we’ll experience will just be the latest in a long run of drought related events.

Believe it or not, the problem started more than a century ago, when non-Indian society cut down virtually all the trees. As the giant cedars and other native evergreens fell victim to the greedy axe, the capacity of our watersheds to hold rain and snow – and
release water slowly into the streams and rivers – went with it. That’s what trees do naturally, soak up and slowly release water. Almost all of the trees to be found along the rivers now are second, third and fourth growth. New trees would one day be able to take the place of their ancestors, but they have to be allowed to stick around long enough, and not be replaced by condominiums and concrete. Mix the tree problem with the impacts of dams, the straightening of streams and rivers to accommodate agriculture and development, the massive impacts of the swelling population, and the water problem gets more complex.

Then mix in the effects of climate change brought about primarily by man. As U.S. Senator John McCain, new chairman of
the Senate Committee on Indian Affairs, told delegates to the National Congress of American Indians last week, “Climate
change is real, and man is causing it. Don’t let anyone tell you different.” The effect on us here in the Northwest? We still get
rain. We’re not getting much snow. Thus, water pours down the watersheds every year, causing winter and spring floods.
Then it’s gone.

Mix all this with the impacts of over-appropriation, water hoarding, and the failure of the legislature and Congress to prevent
it, and what do you get? A witch’s brew —thick with chemicals and other contaminants, but pretty thin on water. In short, you
get drought, along with very serious questions about the quality of life in the Northwest.

You also get finger-pointing intended to divert attention from the real problem. Some say harvest is to blame for the downward
trend in salmon populations. They make big news of the occasional successful harvest of fish, rare though it might be especially
if it’s by a tribe. Not only are such reports highly discriminatory, they’re misleading. Harvest has been cut back
more than 80 percent for more than a decade. The real problem is habitat destruction caused by over-development and overappropriation
of our limited water resources. And it’s made worse by the failure of local, state and federal government to take
a courageous stand on behalf of future generations.

There are solutions to the Northwest drought. Some of these will be topics for future columns. For now, please listen to me
when I say that easing restrictions on industrial, agricultural and municipal use of our dwindling water supply is not one of
these solutions. 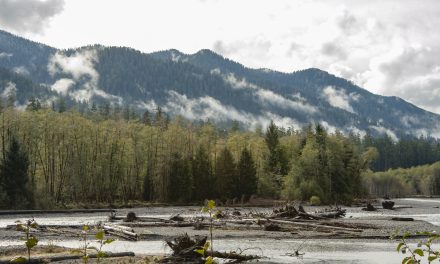 Tribes Are A Political Force, If People Listen