Being Frank: We Need All Hands on Deck to Slow the Spread of European Green Crab 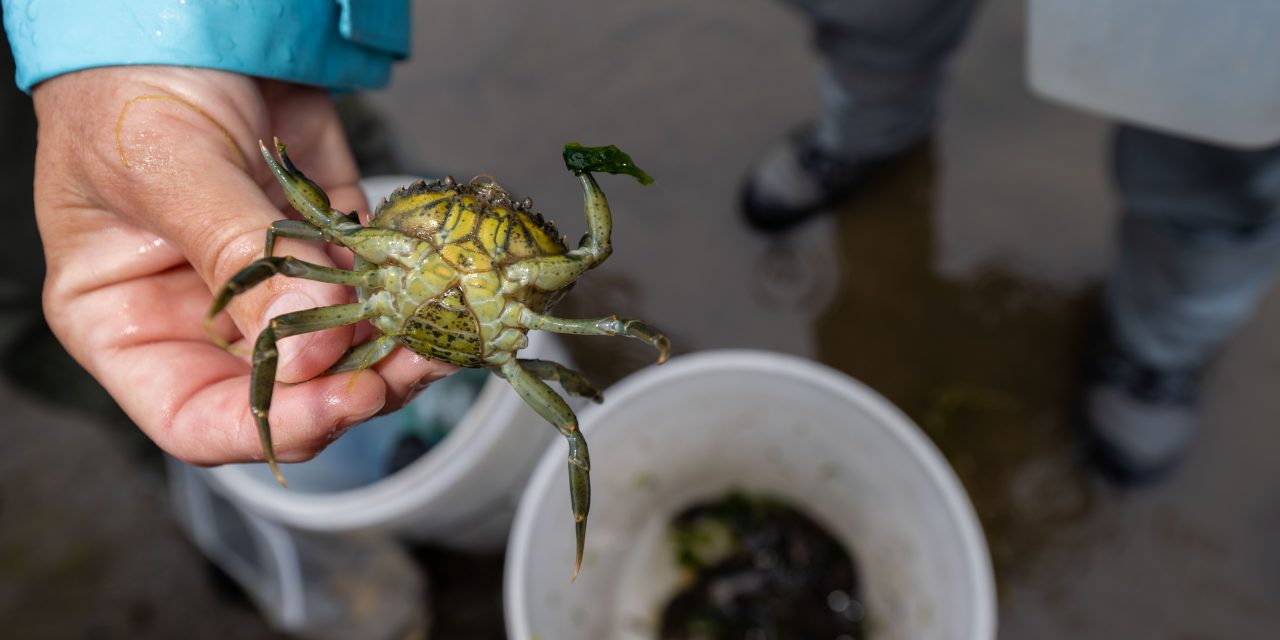 Being Frank is a column written by Chairman Ed Johnstone of the Northwest Indian Fisheries Commission. As a statement from the NWIFC chairman, the column represents the natural resources management concerns of the treaty Indian tribes in western Washington.

Efforts are ramping up to control the explosion of invasive European green crab (Carcinus maenas) in western Washington.

The invasive species reached San Francisco in 1989 and was first detected in small numbers on the Olympic coast in 1998. We’ve now reached the point where thousands are being caught every year in Grays Harbor, Willapa Bay and Makah Bay.

The Makah Tribe developed a robust trapping program, which caught 1,200 within the first two months of the trapping season this year. In the Tsoo-yess River channels, they can find up to 40 of them within a span of 5-10 minutes.

But not every tribe has the resources to keep up with this unchecked proliferation. My tribe, the Quinault Indian Nation, doesn’t have the staff to trap aggressively in Grays Harbor.

It was only a matter of time before the crab reached the Salish Sea. In 2012, a population of green crab was found in the Sooke Inlet of Vancouver Island, and in 2015, the state’s Washington Sea Grant Crab Team began monitoring Puget Sound shorelines. The crab team expanded its trapping efforts to Grays Harbor, Willapa Bay and Makah Bay in 2020.

Last year, we saw exponential increases in green crab numbers in estuaries along the Olympic coast as well as in Lummi Nation’s sea pond in north Puget Sound. The shallow 750-acre sea pond is part of Lummi’s hatchery facility. It was designed to cultivate shellfish and juvenile salmon, but unfortunately, that made it a perfect incubator for an invasive species. The first green crab were found there in 2019 and last year, thanks to an extensive trapping effort, the tribe captured 70,000 of them.

The Lummi Indian Business Council declared the European green crab invasion a disaster in November 2021. In January 2022, Gov. Inslee ordered his state agencies to implement emergency measures to try to control the spread.

The state Legislature made $8.6 million available in the 2022 supplemental budget signed in March. Lummi and Makah were given highest priority and received some of that emergency funding this year, and we’re working with the state to direct more resources to population control on the coast.

At this point, there’s no hope of eradicating European green crab in our region. They’re here for good and they’re threatening our shellfish industry. They’ve traveled as far south in the Salish Sea as Hood Canal, where a male European green crab was found in May 2022.

We’ve seen the damage they cause. On the East Coast, European green crab are to blame for the collapse of the eastern softshell clam industry in Maine.

We know they destroy nearshore habitat by burrowing into the mud and damaging eelgrass beds, which are critical habitat for shellfish and salmon. But we don’t yet know what the long-term effects will be on Washington’s local crab populations including Dungeness crab.

Last summer, the Makah Tribe began researching the overlap between the habitat used by both species of crab, to learn more about that threat. Part of the work involves setting up video cameras underwater to see whether green crab and Dungeness crab are aggressive toward each other or preventing one another from accessing food.

Because of the decline in our salmon runs, tribes depend on Dungeness crab to sustain our economies and ways of life. If we don’t slow down the spread of European green crab, we’re at risk of losing Dungeness crab too.

We need all hands on deck if we’re going to protect native species from this invasive threat. We need management and funding to support a coordinated effort with boots on the ground.

Above: European green crab can be distinguished by the five spines on either side of their eyes. Photo: Tiffany Royal

Let’s Get Back On The Right Path