The instrument is quite simple to use – attach a mesh bag filled with mesh kitchen scrubbers to a small buoy and place the contraption in Puget Sound. Although simple in construction, this technique for capturing baby crab has been utilized successfully worldwide for a long time.

Fortunately for tribal biologists, once post-larval crabs are ready to settle, they will grab a hold of the first thing that provides enough texture for them to hold onto. By placing the scrubbers along the nearshore, the goal is to capture a subsample of the crab as they wash towards the shore to settle. Thus, with a little luck, when the buoy is pulled 24 hours later, there will be dozens of young Dungeness crabs larvae attached.

That’s the hope of Suquamish Tribe’s shellfish biologist Paul Williams, who is helping to recruit tribes, state and county agencies and volunteer groups to help collect the native crustaceans throughout Puget Sound. Williams is collaborating with Leif Rasmuson, the Skokomish Tribe’s shellfish management biologist, who wrote the initial project proposal and is managing the project in Hood Canal.

“By collecting crab larvae, shellfish managers hope to find out where they came from,” Williams said. “In their last larval stage, they are called megalops due to their huge eyes. At this stage, they grab on to anything they encounter in order to determine if it is a good place to transform to bottom-dwelling, juvenile crab.  So, we just put the scrubbers in their path and they grab on. Having collection stations throughout the region will bring in extensive data about the region’s fluctuating crab population and help us better manage the harvest.”

The focus of the project is the declining Dungeness crab population in Hood Canal. In 2008, there was a drop of 75 percent in the amount of crab caught in the area, down from 700,000 pounds in 2005.

The tribes want to know if the crab found in Hood Canal originated there or if they came from the Pacific Coast or other parts of Puget Sound.

“The current scientific literature has limited information regarding Hood Canal crabs, but the literature from other regions shows the distinct possibility that recruitment limitations could be a cause for the decline in the crab population that managers are observing in the canal,” Rasmuson said. “With any hope, this project will allow managers to gain insight into the early life stages of this commercially important species and help to determine how fluid populations are throughout the state.”

When crab eggs hatch, the larvae drift with tidal currents for up to six months before settling down to mature into adults in estuaries and other nearshore areas. Biologists hope to determine the source of the baby crab based on their size and when they settle in a specific location.

While this study is looking at natural fluctuation of larvae coming from outside Puget Sound, a number of factors may contribute to the decline including overfishing, low dissolved oxygen and disease.

Williams and Rasmuson are looking for volunteers in Hood Canal, the Strait of Juan de Fuca, Admiralty Inlet, the San Juan Islands and Whidbey Basin. Detailed training sessions will be provided throughout Puget Sound. More information can be found at http://sites.google.com/site/megalopasite/. 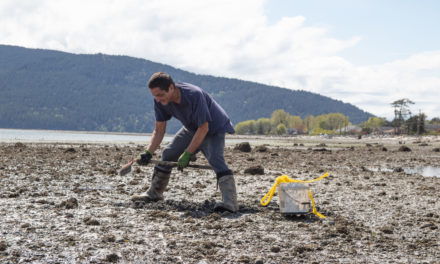 Squaxin Island Tribe releases salmon to find out where they go