Lummi Nation fishermen are returning to the traditional method of harvesting salmon in a reef net.

The tribe held reef net fisheries for hundreds of years at traditional sites such as Cherry Point, known in the tribal language as Xwe’chi’eXen. After the Lummi Nation signed the Point Elliott Treaty in 1855, tribal fishermen continued to reef net until about 1894, when non-Indian fish traps out-competed them, according to the 1974 U.S. v. Washington ruling that reaffirmed tribal treaty fishing rights.

A 1934 ban on fish traps in Puget Sound gave tribal fishermen renewed access to their traditional sites, but the 1939 opening of a cannery brought more competition from non-Indian fishermen who were able to reef net in more profitable locations.

In the U.S. v. Washington ruling, Judge George Boldt noted that there were 43 reef nets operating off Lummi Island at the time; none of them by tribal fishermen.

“Our journey back to the sxwole, our reef nets, is in its infancy and we’re just now starting,” said Troy Olsen, one of the fishermen leading the effort. “We’ll go through several years of trials before we can really get back to the salmon path.” 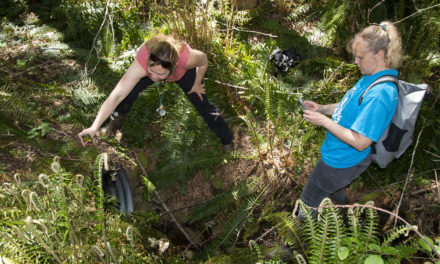