SHELTON (April 14, 2003) — Since Goldsborough Dam was torn down two years ago, hundreds of salmon have begun spawning above the site of the old dam. Last year, the Squaxin Island Tribe counted over 15,000 young chum salmon migrating down from the newly opened habitat. “A lot great salmon habitat was blocked when Goldsborough Dam was built. We’re excited to see how many salmon have been getting up there in the two years the creek has been open,” said Joseph Peters, fisheries biologist with the Squaxin Island Tribe. “The success of removal can’t be judged without first seeing how many salmon use the new habitat.”

This year, the tribe is continuing their efforts to assess the benefits of removing the Goldsborough Dam that had restricted fish passage. Removal of the dam was a cooperative effort involving the Squaxin Island Tribe, Simpson Timber Company (the dam owners) and local, state and federal agencies. Twenty-five miles of habitat, including some notable spring-fed wetlands important to coho rearing, was opened after the dam came out.

In addition to surveying returns of spawning adults this fall, the tribe has also been operating a couple of smolt traps to monitor production of the creek. Smolt traps are passive, water-powered devices that safely and effectively catch young salmon. “Because juvenile coho “over winter” instead of leaving freshwater the same year they hatch, we won’t start seeing the offspring of the first post-Goldsborough dam coho until this year,” said Peters. The tribe is carrying out the trapping under contract with the U.S. Army Corps of Engineers, who conducted the dam removal.

At least twice a day, tribal staff check the traps, noting species types and lengths. “We are getting a cross section of the salmon that are migrating out to sea,” said Peters. Screw traps, because they don’t span the entire width of a creek like other smolt traps, only trap a portion of the migrating fish.

Goldsborough Creek is in a network of five other creeks the Squaxin Tribe has been monitoring for the last several years. The traps will be operated until the end of June, when most salmon smolts have migrated to sea. Smolt comes from the word “smoltification” which is the term used to describe the physiological changes that young salmon undergo while in freshwater, just before migrating downstream and entering saltwater.

In addition to studying the effects of dam removal, the trapping also aids fisheries management. “Every piece of information we can pick up, from the number of adult spawners to smolt production, goes to planning future fishing seasons,” said Peters. “Providing sustainable fisheries on chum and coho are a major goal for the Squaxin Island Tribe, and collecting this data is the best way we can assure that.”

The removal of the Goldsborough Dam confirms the importance of protecting and restoring salmon habitat. “Returning adults can have access to all the habitat in the world, but it won’t matter if the habitat they’re returning to is bad,” said Jim Peters, the tribe’s Natural Resources Director. “All salmon need is good habitat and the ability to access that habitat. Decreasing harvest over the past 20 years has only gone so far in terms of salmon restoration, we have to work just as hard to repair damaged habitat.”

Photos available: Photos of upper Goldsborough smolt trap installation can be e-mailed at high resolution. Call Emmett O’Connell at above number for details.

Major changes to Elwha River since start of dam removal 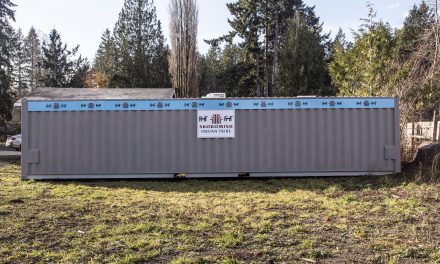