SEDRO WOOLLEY (August 2, 2004) — The roar began at 3 a.m. By the time the flood had subsided four hours later, a 10-foot wall of water had scoured Colony Creek with sufficient force to sweep away a nearby resident’s car, depositing the small import automobile atop a large logjam 800 feet downstream.

Beaver dams are usually beneficial to salmon. But when a huge dam burst on Colony Creek, near Chuckanut Mountain in Whatcom County, the 10 acres of 10-foot-deep water formerly held back blew out a wide swath of the salmon stream. The flood devastated fish habitat, forcing fallen trees and spawning gravel up out of the water and onto surrounding banks.

Because of this February 2003 event, miles of productive fish habitat have been destroyed or made inaccessible to the multiple species of salmon and trout in the area. But in the next two weeks, the Upper Skagit Indian Tribe will fix that.

“Colony Creek is a very productive salmon stream for its size,” said Doug Couvelier, a biologist with the Upper Skagit Tribe, “but fish need large woody debris and the right size of gravel for spawning and rearing habitat. For healthy fish, we knew we needed to get wood back into the stream.”

Throughout late July and early August, a tribal crew is moving fallen cedar, alder and hemlock logs back into the stream to replace the wood that rising waters removed. Besides that, they’ll remove significant barriers to fish passage, ensuring that natural flow patterns return to Colony Creek.

“Before the flood, this was loaded with coho fry,” said Couvelier, pointing toward the upper portion of the creek. In addition to removing the logjams where young fish like to seek refuge, the waters created a blockade that stopped adult salmon from making the journey home to spawn.

When floods rush through creeks, they carry soil and other sediments with them. In this case, the flood’s power replaced spawning gravel with hard, useless clay and suffocatingly-fine sediment. Plus, the waters forced an enormous pile of silt up against a defunct wood bridge, blocking salmon from returning to their spawning grounds.

While years past saw many adult fish reaching the upper portions of colony creek, none made it past the bridge this past season. The flood, Couvelier said, effectively eliminated 2 miles of fish habitat.

In mid-August, though, salmon will once again have a chance to traverse this important stream. Colony Creek is one of the few independent streams in the area – meaning it drains directly to marine waters. The 11-mile creek gives sea-run cutthroat trout, chinook, coho and chum salmon a home before leading the fish to Samish Bay and the open sea.

“Spawning and rearing habitat is crucially important for salmon recovery, and this work will solve a lot of habitat problems for fish,” said Scott Schuyler, natural resources policy coordinator for the Upper Skagit Tribe. “Putting wood back into the system will provide cool, calm pools for fish; restoring the creek’s normal functions will prevent sediment from smothering salmon nests.”

Members of the Upper Skagit Tribe’s crew include Lee Washington, Diego Villanueva, Sherman Williams and Ross Fenton. Skagit Valley College graduate Jennifer Weeks is also assisting the project. The project is funded by a $23,400 grant from the state Department of Ecology. 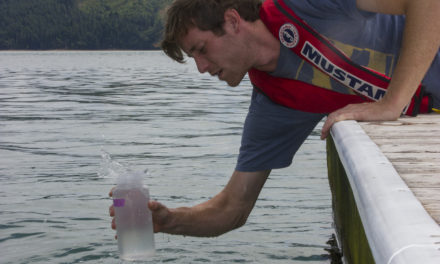