The Upper Skagit Indian Tribe is sampling zooplankton in Baker Lake and Lake Shannon to track the availability of food for juvenile sockeye salmon.

The results will let fisheries managers know whether the reservoirs can support an increase in sockeye production at Puget Sound Energy’s (PSE) Baker River hatchery. The Upper Skagit Tribe took over zooplankton monitoring from PSE two years ago, after the utility’s Federal Energy Regulatory Commission license was renewed.

“Sampling zooplankton, the preferred prey of sockeye, will let us know what time of year they become most abundant,” said Jon-Paul Shannahan, biologist for the tribe. “That way, we can manage the sockeye hatchery releases when the most food is available.”

Tribal natural resources staff collects zooplankton from the lakes during spring and summer, the primary growing season for sockeye salmon. The samples are sent to a lab in Idaho that identifies the types of zooplankton and calculates the abundance and biomass in the two reservoirs.

PSE’s Baker River Hydroelectric Project consists of two dams on a tributary to the Skagit River. Built in 1925, the Lower Baker Dam created Lake Shannon, and in 1959, the Upper Baker Dam enlarged and raised Baker Lake.

“In a 2010 study of Baker Lake and Lake Shannon, there was a noticeable decline in the preferred zooplankton biomass as numbers of sockeye increased,” Shannahan said. “The tribe wants to make sure the food source will be able to sustain a larger number of fish.” 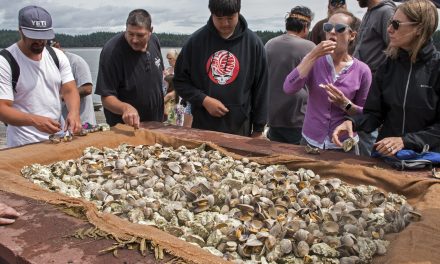