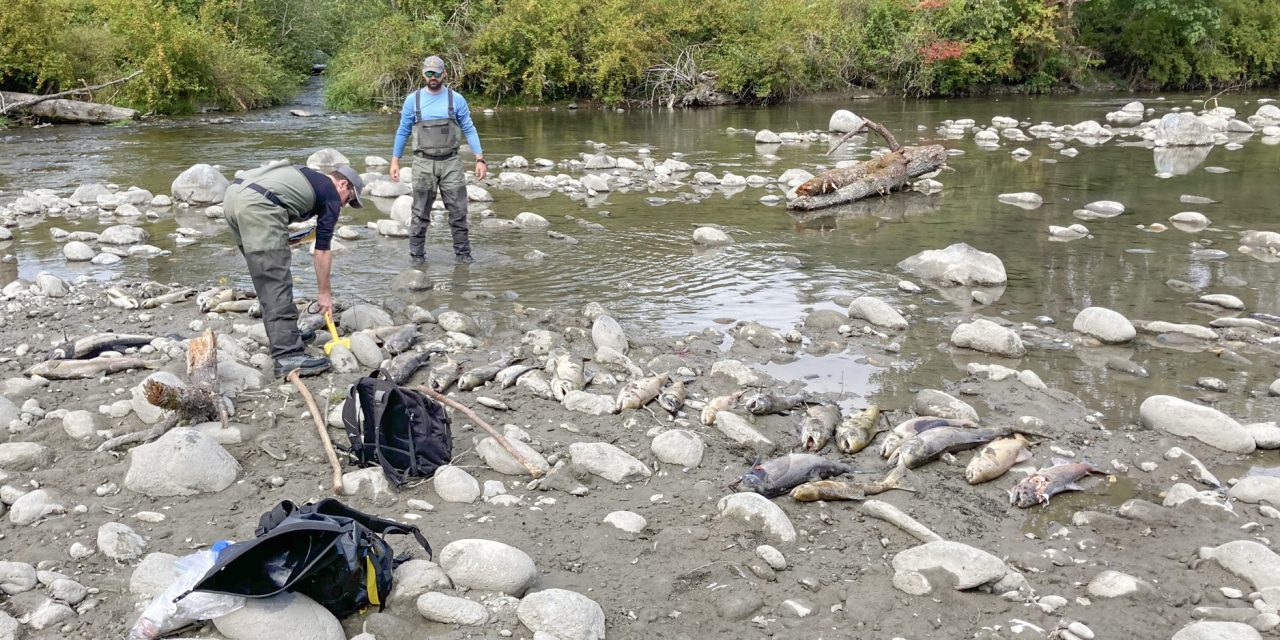 The tribal and state natural resources staff that sampled the water and fish carcasses determined that the die-off was the result of severely degraded habitat quantity and function.

“Specifically, the salmon were killed by high water temperatures and low flows that greatly stressed the fish and increased the prevalence of naturally occurring pathogens that can cause disease in fish,” said Lummi hatchery program manager Tom Chance.

Even without extreme weather events, South Fork Nooksack chinook have been exposed to lethal conditions for the past 40 years.

“Climate change is the straw that broke the salmon’s back and resulted in this tragic die off,” said Lummi Indian Business Council member Lisa Wilson. “We cannot simply blame climate – we need to look at what each and every one of us is doing that is contributing to the demise of the salmon.”

Since 2007, the Lummi Nation has worked with the Nooksack Tribe and state and federal agencies to recover the South Fork run using a captive broodstock program. By 2017, enough adult salmon were returning to the tribe’s Skookum Creek hatchery that the program no longer needed to collect broodstock as juveniles to be raised in the hatchery.

The mass mortality in September coincided with a record number of those chinook returning to the hatchery. The work to bring the population back from extinction was undermined by an overall failure to protect and restore riparian habitat.

“Sadly there is no political or public will to fix the problems, and very few options exist to prevent this catastrophic event from happening again,” Wilson said. “A major change is needed to restore and protect salmon habitat, especially with Washington state’s booming population growth.”

Federal and state permitting regulations make it easier for new housing developments to destroy habitat than it is to restore habitat. Among these is the Federal Emergency Management Agency’s “no-rise” policy for in-river habitat structures that prevents Lummi from building the structures that could prevent another fish die-off from happening.

“We had about 1,200 adults return to the hatchery, but males were overwhelmingly represented since the pre-spawn mortality disproportionately killed off females,” Chance said.

The salmon that made it to the hatchery were healthy, said NWIFC program veterinarian Nora Hickey. “They did not have problems with disease and loss due to Columnaris disease and Ich like the pre-spawning mortalities in the river,” she said. “Hatchery staff were able to spawn them successfully and their progeny will be released this spring even if the natural-origin contribution of juveniles is weaker due to the pre-spawning mortality in the river.”

The recovery goal for the South Fork chinook stock ranges from 9,100 to 13,000 natural-origin spawners.

The habitat also suffers from legacy impacts and ongoing destruction from land conversion like logging, agricultural and population growth.

“We are using our Lummi-owned hatcheries and working with our regional co-managers here in the Nooksack watershed to solve a problem we didn’t create, so we can recover this traditional food source and live our Schelangen (way of life),” Wilson said. “We need private, local, state, and federal partners to step up and do their part.”