The Tulalip Tribes and the U.S. Forest Service have partnered to enhance huckleberry fields for tribal gathering in the Mount Baker-Snoqualmie National Forest.

For the past two years, Tulalip staff helped thin forest stands in the Darrington Ranger District to reduce competition from older trees. A controlled burn is planned to rejuvenate the huckleberry fields by reducing the tree canopy. Northwest tribes have a long history of using fire as both a cultural practice and a forest management tool.

“For thousands of years, tribes nurtured the landscapes they depended upon for their health and survival,” said Hank Gobin, director of the Tulalip Tribes Hibulb Cultural Center and Natural History Preserve. “That included land-management practices to maintain a diversity of plant and animal populations, like burning for wildlife forage, and pruning or burning for huckleberry.”

Huckleberry plants in the North Cascades thrived after the mature forest was harvested in the 1980s, but fruit production has declined as conifers have re-established themselves. It may take several years after the controlled burn to see a measurable increase in fruit production.

Tulalip’s partnership with the Forest Service is an example of cooperative management intended to ensure sustainability and access to treaty-reserved resources on public lands. In western Washington, reservation lands alone do not provide enough food, traditional plants and other resources to sustain tribal culture.

“Contrary to what many may think, the northwest was not an untouched wilderness before white explorers and traders arrived here; instead, it was home to the tribes for the last 10,000 years,” said Ray Fryberg, director of the Tulalip Tribes Natural Resources Department. “Our ancestors figured out long ago a way to treat the lands with respect, with a kind of stewardship that sustained and enhanced the plants and animals they needed.” 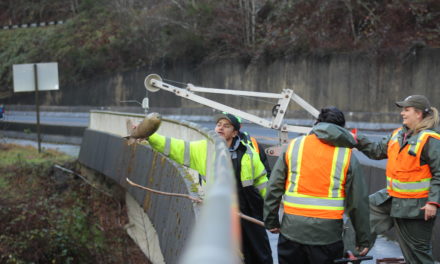