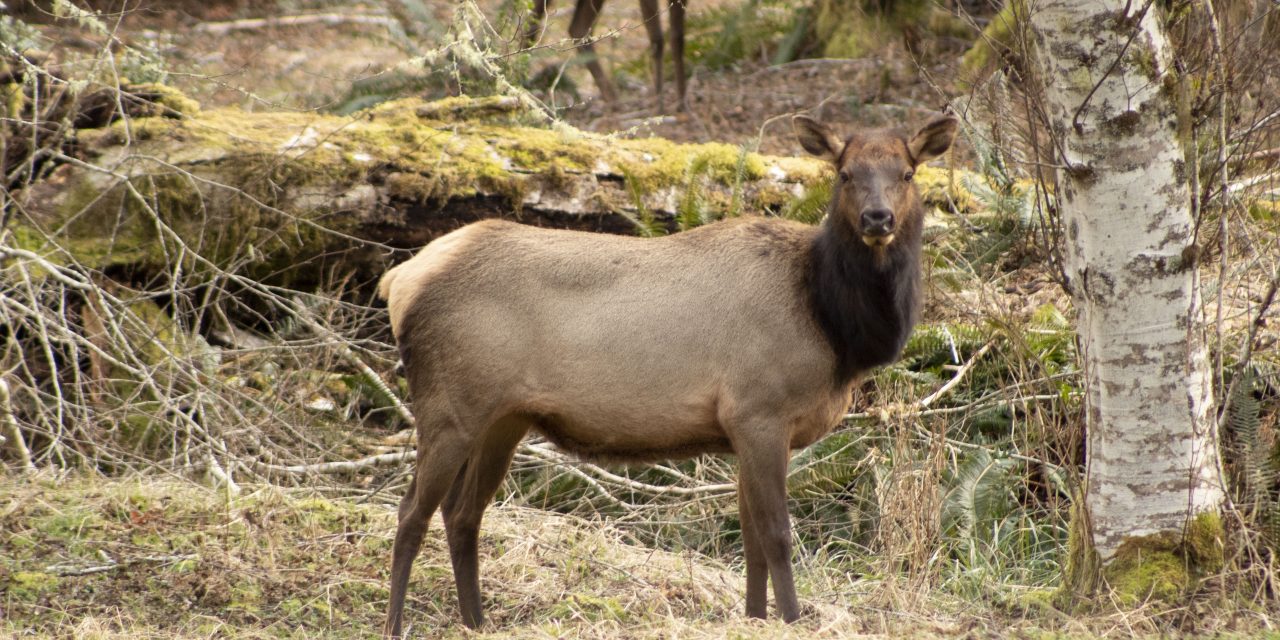 The entire Duckabush elk herd is sitting about 100 yards away from Charin Godbolt, who is keeping her eye on a particular young bull.

The Port Gamble S’Klallam Tribe wildlife biologist is hoping the 2.5-year-old branch-antlered bull gets a little closer so she can outfit it with a GPS/VHF collar.

For several weeks this winter, Godbolt and Dylan Bergman, Point No Point Treaty Council (PNPTC) wildlife biologist, tracked this herd to learn more about its population size, migration patterns and genetic diversity. The PNPTC is a natural resources consortium of the Port Gamble S’Klallam and Jamestown S’Klallam tribes.

A handful of elk have been collared with VHF trackers so the tribe can find the general location of the herd with a VHF antenna and receiver. Some of the collars have a GPS tracker, which shows migration patterns.

The biologists also take hair and blood samples for DNA testing, driven by the concern there could be inbreeding because the cows don’t leave their 8-square-mile home range of the Duckabush River valley, Bergman said.

“The only hope for genetic diversity is the bulls moving between the Duckabush, Dosewallip, Hamma Hamma, Lilliwaup and Olympic National Park herds,” he said. “We don’t know if bulls are moving between herds, so we are collaring a few of the 2.5-year-old bulls so we can follow them.”

Elk hoof disease and chronic wasting disease aren’t an immediate concern at the moment, “but we know they’re coming,” he said. Those diseases could increase the mortality rate and change how the tribe and the state manage the herd.

All this data helps with wildlife management discussions at a fine level with the co-managers, Bergman said.

“We use the data to help the tribes and the state set hunting seasons and inform land-use management decisions, such as state land sales, mitigation and potential development – pretty much anything that would impact that herd’s habitat,” Bergman said.

The herd recently has averaged 40-50 animals, and is rebounding from a low, Bergman said.

The animals generally stick to floodplains, state parks, alder bogs, logged areas and meadows because of the variety of grasses available, moving between public land and privately owned land. The tribe has established working relationships with land managers, park rangers and private property owners to access the elk when they come onto those properties.

Forestlands typically produce less than 100 pounds per acre of grass available for eating, while open lands can produce several hundred pounds per acre of available grass, he said. While elk will eat ferns, alders, and shrubs, they prefer grasses and forbs, especially at this time of year when grasses are beginning to grow again and will be high in protein and sugar.

“If you depend on eating grass for survival and producing heavy calves, where you hang out makes a difference,” Bergman said. “Grass is a major source of protein in late pregnancy.”

The herd is tracked throughout the year, with a focus on the late winter/early spring because biologists can see the yearlings and spikes, plus female cows who are in their second trimester.

The average lifespan of an elk is 10-12 years but varies depending on the hunting pressure and the quality of habitat available for the animal to eat and reproduce, Bergman said.

A member of the Duckabush elk herd hangs out in the valley. Photo: Tiffany Royal

The Herald: Tulalips can hunt on firm’s property