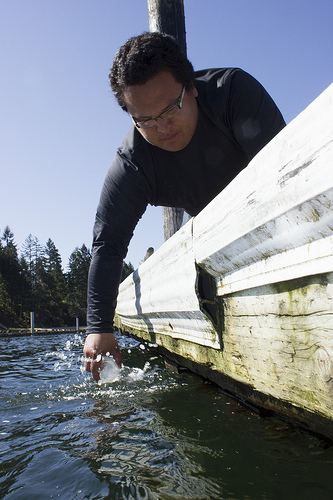 The Jamestown S’Klallam, Nisqually and Stillaguamish tribes are participating in the SoundToxins monitoring program to provide early warning of harmful algal blooms (HAB) and outbreaks of bacteria that could sicken humans.

“We want to make sure shellfish are safe to consume, not just for tribal members, but for all seafood consumers,” said Sue Shotwell, shellfish farm manager for the Nisqually Tribe.

The SoundToxins program helps narrow down the places where shellfish should be sampled for toxins, which is more expensive and time-consuming than testing the water.

“Just because we find algae that produce toxins doesn’t necessarily mean there are toxins in the seafood, but it could mean there will be soon,” said Stillaguamish marine and shellfish biologist Franchesca Perez. “If high numbers of an HAB species are found, then a sample of the water is sent to SoundToxins for further analysis, and appropriate parties are contacted to protect consumers and growers. We also look for Heterosigma, a flagellated plankton that causes fish kills.”

The Stillaguamish Tribe is sampling Kayak Point in Port Susan. Nisqually is monitoring the water at Johnson Point in Olympia, and the Jamestown S’Klallam Tribe is taking its samples from the dock at Sequim Bay State Park, a popular shellfish harvesting site.

“Sequim Bay has had a number of harmful algal blooms historically,” said Neil Harrington, Jamestown S’Klallam Tribe environmental biologist. “When we see the phytoplankton cells increase in the water column, we know to start increasing shellfish sampling for toxins.”

All three types of plankton that cause HABs in Puget Sound have been measured at toxic levels in Sequim Bay.

SoundToxins is managed by the National Oceanic and Atmospheric Administration’s Northwest Science Center, Washington Sea Grant and the Washington Department of Health.