The Lower Elwha Klallam Tribe has developed a comprehensive database that shows salmon and wildlife habitat in the Elwha River watershed still in need of protection.

The tribe was approached by North Olympic Land Trust, a land conservation nonprofit in Port Angeles, to develop a system that uses decades of available data from federal, state, county and tribal resources to find these areas by parcel. The data used in the Elwha River Conservation Area database includes aspects of salmon habitat such as land slope, tree canopy height, streams, wetlands and parcel geometry.

“This tool allows land managers to query the database for different attributes, in this case, salmon habitat features,” said Mike McHenry, the tribe’s habitat program manager. “It can be used to prioritize the identification of potential parcels for conservation, but doesn’t replace evaluation on the ground.”

The study area includes the land north of Olympic National Park and south of the Strait of Juan de Fuca, as well as land between the eastern end of Little River and the western end of Indian Creek, two significant salmon tributaries to the Elwha River.

The goal is to be able to review data on 1,300 privately owned parcels, out of more than 1,800 parcels within 322 square miles of the Elwha River watershed. It also could be used to look at the habitat quality on public and tribal lands, McCoy said.

“It’s really cool to have this tool that is so malleable and is not static,” said Michele Canale, North Olympic Land Trust’s conservation director. “If we want to, we can sort by wetlands or shoreline, or by acre sizes, like 100 acres or 5 acres, or use it to prioritize other outcomes we want to study, such as wetland conservation.”

Including all of the data into one program can show what potential parcels could be protected, McCoy said. The Land Trust is using this information to reach out to property owners about possible conservation options.

Tightline Adventure at the Puyallup Tribe of Indians 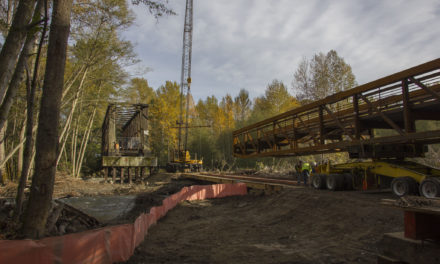