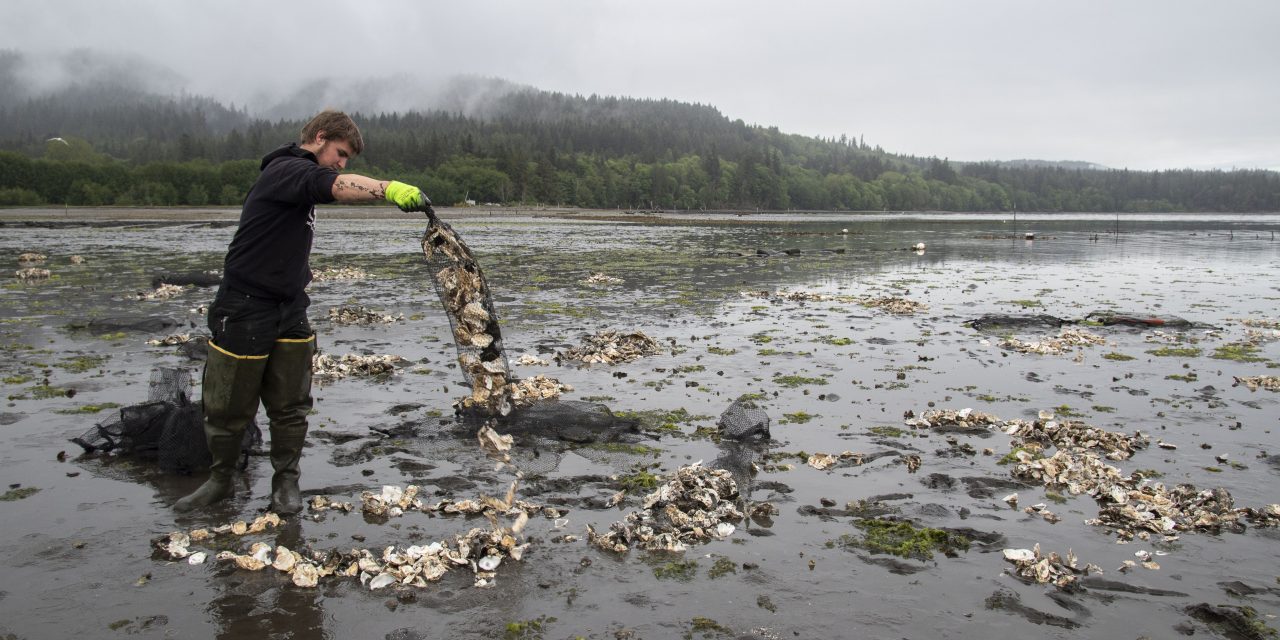 The tribe spread 2,500 bags of oyster shells on its tidelands this year, building on recent smaller but successful restoration efforts. The shells, known as “cultch,” provide a surface for oyster seeds to grow on.

“It’s becoming obvious that oysters are doing well here but there is not a ton of good substrate,” said Liz Tobin, the tribe’s shellfish biologist. “Where it is good, they flourish, so we are enhancing the area to give them a leg up.”

Historically, there was a sustainable Olympia oyster population in the bay, confirmed recently by the tribe’s historic preservation officer, who found a shell midden that was 40 percent Olympia oyster shells carbon-dated back 1,000 years.

In the 20th century, oyster populations suffered because the bay was used as a log yard, filling the head of the bay with fine sediment, Tobin said. Since the restoration of Jimmycomelately Creek in 2005, which empties into the bay, the tidelands have firmed up.

In 2013, the tribe, with the Clallam Marine Resources Committee (CMRC), started enhancing oyster habitat and seeding the bay to reestablish a sustainable population.

“We’ve discovered that Olympias are really habitat-specific,” said Chris Burns, a natural resources technician for the tribe. “In addition to needing substrate, they also like the seeping muddy stuff, with the moisture at the surface, which keeps them cool in the mud. Sequim Bay has plenty of that.”

The tribe also is working with the Puget Sound Restoration Fund (PSRF) to establish a Sequim Bay broodstock. Last winter, Burns and Tobin, with PSRF staff, harvested Olympia oysters from the beach, then took them to the PSRF shellfish hatchery in Manchester to raise to seed. This summer, the tribe will receive bags of oyster shells planted with those seeds, which will be hardened on the beach before being distributed in spring 2020.

The Olympia oyster is native to the area but was harvested heavily before the Pacific oyster was introduced in the early 20th century and took over the habitat.

The tribe shares a goal with agencies such as CMRC, PSRF and Northwest Straits Commission to restore 100 acres of tidelands for Olympia oysters throughout Puget Sound by 2020.

“The objective of all the partners is to determine what steps are needed to move toward the goal of restoring Olympia oyster populations,” Tobin said.

Invasive mudsnails result from “trying to maintain an artificial ecosystem”