McMinds, 73, helped build QIN government from five employees to nearly 400 today. Known fondly as “Big Butch,” he was a founding member of the Northwest Indian Fisheries Commission and was actively involved in tribal natural resources management throughout his life.

“The roots of the Quinault Indian Nation lie deep within the land,” said McMinds in a speech before the National Indian Timber Symposium. “The land and its resources represent both our heritage from the past and our legacy to the future.”

Helping the young was another focus of McMinds, who along with his wife, Ruth, and daughter, Jeannie, helped raise more than 60 foster children. He was a founding member of the National Indian Child Welfare Association.

McMinds learned early in life about the needs of his people at the home of his grandparents, Frank and Ida Law, in Taholah. “The council and other community leaders were always meeting at the home and he was encouraged to participate from an early age,” said Ed Johnstone, McMinds’ brother and a fisheries policy representative for QIN.

At 18, McMinds was elected to his first term on tribal council. He was re-elected three times and served for nearly a decade in total. He has served as adviser to QIN presidents since 1985. McMinds also served as QIN’s Natural Resources Development Project director from 1970-1984 and as a member of the Pacific Fishery Management Council for 6 years beginning in 1979. Seven years on the Pacific Salmon Commission followed as well as eight years of service on the Pacific Anadromous Fish Commission.

QIN President Fawn Sharp remembers her mother working with McMinds when there were only five employees. “It’s come full circle for me. When I was a child, I saw the Nation out there on the cutting edge, pushing to have our treaty rights upheld. Now, as President, that is the foundation of what we do today.”

McMinds served a two-year hitch in the Army before attending the University of Washington where he received his degree in fisheries. During the summers, he worked on the QIN reservation for U.S. Fish and Wildlife Service counting spawning fish and recording stream data.

He understood QIN could not control its destiny unless it could manage its own lands, and played a large role in returning reservation timberlands management to QIN after years of mismanagement by the federal government.

“Not many people appreciated what sovereignty could be, but Guy certainly did,” said Charles Wilkinson, former attorney for the Native American Rights Fund and a distinguished professor of law for the University of Colorado Law School. “Guy saw how well sovereignty meshed with his other passion, land management based on good science. Over time, he was essential in building major institutions such as the allocation regime under the Boldt Decision, the Northwest Indian Fisheries Commission, the tribal participation in the U.S. “Canada treaty process, and, perhaps most importantly, the amazing natural resource management system and staff at Quinault,” Wilkinson said.

“In the aftermath of the Boldt Decision, Guy McMinds was one of the original tribal leaders that brought equity to tribal fisheries,” said Rollie Schmitten, former National Director of Marine Fisheries. “He was a leader for the Quinault Indian Nation for both forestry and fisheries, but more importantly, he is my friend.”

“Guy’s leadership is reflected in the eyes of all of those that he has taken the time to mentor over the years, and his keen intellect and political acumen have earned him the respect of tribal leaders across Indian Country. His contributions to Indian law, policy and to the protection of fishery resources are without equal,” said Patricia Zell, former Chief Counsel and Staff Director, U.S. Senate Committee on Indian Affairs.

McMinds encouraged President Sharp and others to obtain college degrees and bring their knowledge home to Quinault. “He’s always understood the bigger picture,” Sharp said. “When I was in eighth grade, he told our class that water would be worth more than gold and clean air worth more than oil,” Sharp said.

“Leaders like Guy and Joe DeLaCruz were the right people for the right time,” Ed Johnstone said. “They could see where we needed to go. They had good relations with other tribes and they sought out connections with people who could help. They weren’t shy about telling the federal government what their responsibilities were, how they had failed us, and how they could make it right.”

“Guy is a leader and a warrior,” said Billy Frank Jr., chairman of the Northwest Indian Fisheries Commission. “He has fought hard his whole life for the Quinault people and all tribes. He has been right there at every turn, helping us to fight for our sovereignty, treaty rights and survival as Indian people. We all owe him thanks.”

For a gallery of pictures of McMinds through the years, follow this link to our Flickr feed. 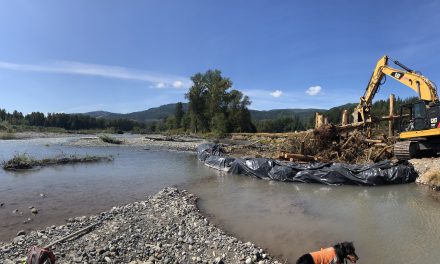 Grant may save Stillaguamish River chinook