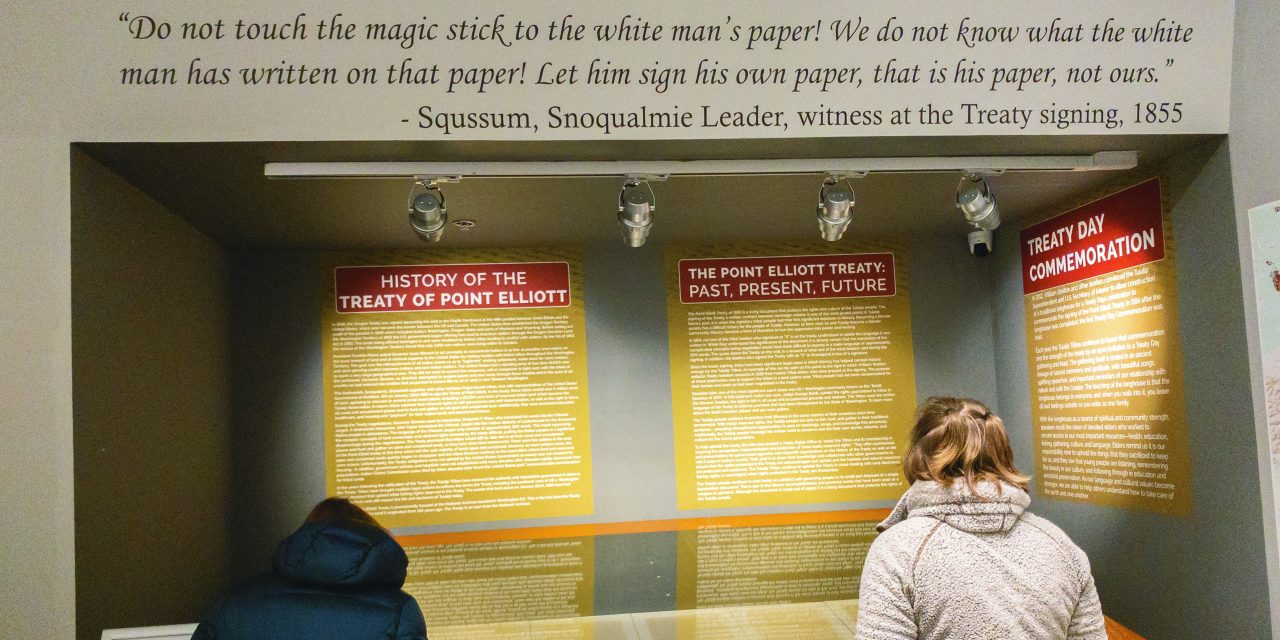 Seven generations after Northwest tribes signed treaties with the U.S. government, the Treaty of Point Elliott is on display at the Tulalip Tribes’ Hibulb Cultural Center through July.

The document was signed Jan. 22, 1855 and has been stored in the National Archives in Washington, D.C., for most of the time since then.

Hibulb curator Tessa Campbell and assistant curator Emilie Smith arranged to borrow the treaty as part of an exhibit called “The Power of Words: A History of Tulalip Literacy.” While developing an exhibit about Tulalip authors, they traced the tribes’ first experience with the printed word back to the signing of the treaty.

Tribal leaders, including those representing the Lummi, Muckleshoot, Nooksack, Sauk-Suiattle, Stillaguamish, Suquamish, Swinomish, Snohomish, Snoqualmie, Skykomish and Upper Skagit tribes, marked X’s beside their names on the treaty. In doing so, they ceded almost all of their land in exchange for the continued right to fish, hunt and gather as they always had, as well as health care and education for tribal members.

Tribal members were relocated to reservations, and those from the Snohomish, Snoqualmie and Skykomish tribes, along with allied bands, became known as the Tulalip Tribes.

On the walls of the Hibulb Cultural Center, a quote looms over the Point Elliott Treaty’s display case: “Do not touch the magic stick to the white man’s paper! We do not know what the white man has written on that paper! Let him sign his own paper, not ours,” said Squssum, a Snoqualmie leader who witnessed the 1855 signing.

The narrative continues through the exhibit, describing how tribal children were sent to boarding schools where they were forced to assimilate into the settlers’ culture and forbidden to speak their traditional languages. There they were taught to read and write in English.

“Literacy has allowed us to keep a record of our history, culture and teachings,” Campbell said. “Literacy has not replaced our lifeways or teachings. Instead, it is a tool we learned to use to our advantage for healing, carrying on the teachings and traditions of our people, and, most importantly, upholding the inherent rights of our treaty.”

Tribal members were invited to preview the exhibit on Jan. 22.

“Since treaty times, every tribal leader has fought to enact and protect the provisions in that document, and that’s why we are still here today,” said Glen Gobin, Tulalip Tribes vice chairman. “We are a sovereign nation with a treaty with the U.S. government because of our ancestors who never gave up the things they thought were most important. When you think of all the adversity the tribes have faced after 165 years, it’s amazing we are still here. It shows the resiliency we have, the strength of our own teachings, and the power of our understanding of what it means to protect that treaty.”