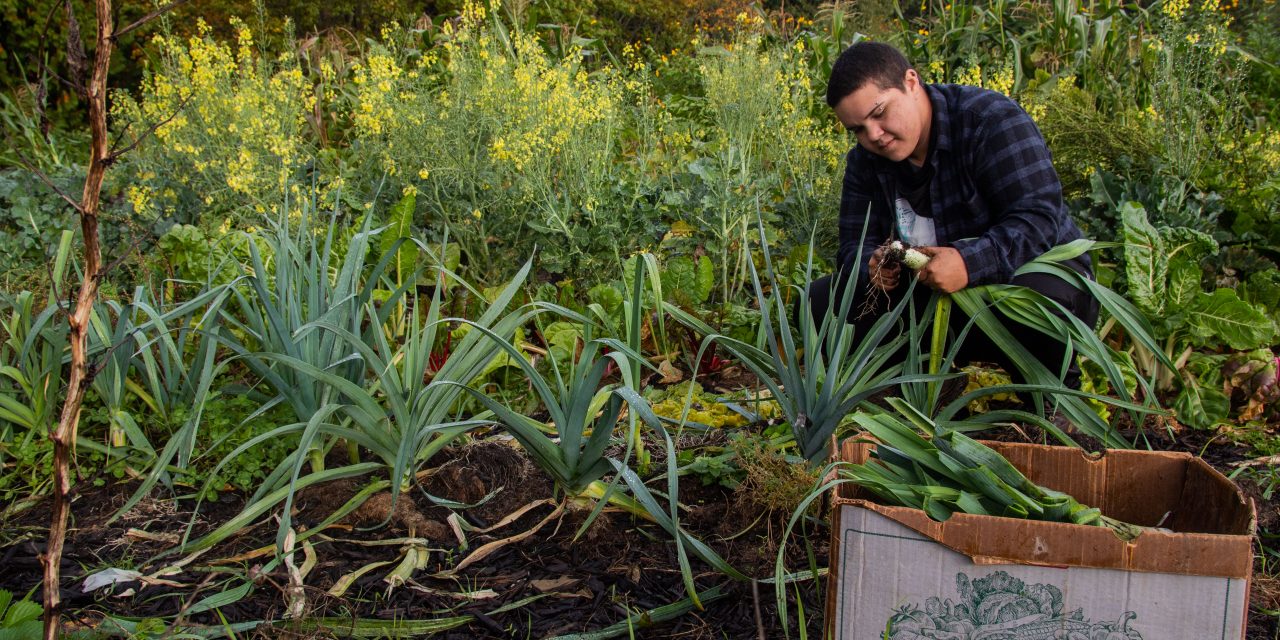 With a sharp knife and two quick flicks of his wrist, Chris Tipton shaved off the tough green ends of a leek and tossed it into a produce box.

Garden assistant Eli Smith looked on, then tried it with her knife and a leek.

They were harvesting the strong-smelling onions for a tribal citizen. This is their job – growing, preparing and providing food for the Jamestown community.

The tribe’s Traditional Foods Program started a community garden in January 2020 within a 30-acre lot owned by the tribe off Marinas Way, which includes an orchard and a berry farm. The tribe also constructed a small building this year that includes a kitchen, where harvested food can be cleaned and prepared.

Tipton, a local farmer hired to oversee the garden, and Smith, tribal citizen, along with another garden assistant and tribal citizen Jessica Johnson, have been working the quarter-acre plot this year, bringing in mulch and soil to fortify the dirt, and planting seeds gathered from local farms and gardens.

In addition to strawberries, fava beans, onions, kale, collards, beets, broccoli, cucumbers and potatoes, Tipton and Smith also planted the “Three Sisters” combo: corn, squash and beans. These are known as companion plants, in that each plant benefits the others. Corn takes up nutrients from the soil, beans put nitrogen back in the ground, and squash plants help shade the dirt and keep out weeds.

They also planted a hedge of sunchokes, tall green leafy plants that peak at about 10 feet tall, topped with a little bright yellow flower. Sunchokes, which are a traditional native food from central North America, have the same carbohydrate content as camas plants, which is a traditional food for Coast Salish tribes.

The Traditional Foods Program is using the garden to feed the community and as a tool to teach food sovereignty, healthy lifestyles, and diabetes and obesity prevention, said Mackenzie Grinnell, the program’s assistant manager.

“We wanted a place to gather, just to get people out on the land, to build community, especially intergenerational, while also encouraging gathering and harvesting,” Grinnell said.

Despite struggling through a pandemic, Tipton and Grinnell found ways for tribal citizens and descendants, both locally and out of the area, to connect with the garden. Classes were taught from the garden via Zoom, including courses on nutrition, diabetes, exercise and gardening. Volunteers pulled weeds, and food was harvested and given to local chefs who held online cooking classes. Food was given to the elders’ weekly meal program and to health clinic staff.

“People like to use what they grow,” Tipton said. “It’s been great to see how much the community has been involved, even with COVID. That’s been the heart of this and it’s been nice to see their relationship with the food.”