“Juvenile salmon from all across South Sound use the Nisqually estuary, so restoring it would mean healthier salmon populations for all of our watersheds,” said Amy Hatch-Winecka, salmon recovery coordinator for the Deschutes and Kennedy/Goldsborough watersheds.

Five South Sound watershed groups are tasked with organizing salmon recovery projects within their own boundaries. Funding for the neighboring watershed groups is coming from the Salmon Recovery Funding Board (SRF Board). The SRF Board process allows local communities to nominate and rank their own salmon restoration projects.

“Not only did the Nisqually watershed step forward to help this estuary restoration become a reality, but the four other South Sound watersheds are also contributing in a very significant way,” said Jean Takekawa, refuge manager at the Nisqually National Wildlife Refuge. “They recognized this greater good. This is an example of how we can all reach across our boundaries to restore Puget Sound.”

The Nisqually watershed organization is also putting $1.5 million allocated through the SRF Board process toward the estuary restoration. “Typically, these local watershed groups fund projects within their own watersheds,” said Jeanette Dorner, salmon recovery program manager for the Nisqually Tribe. “But, we have decided that pooling our resources here makes the most sense.”

In addition to Nisqually River chinook and steelhead, both listed as threatened under the federal Endangered Species Act, salmon from across the South Sound use the Nisqually estuary. For example, over a quarter of the tagged juvenile salmon sampled during a four-year study of juvenile fish in the Nisqually estuary were from other watersheds in the Sound including the Puyallup, Minter Creek on Key Peninsula, and the Deschutes River.

Levees around 700 acres of former estuary will be torn down, allowing the tide to inundate a former cattle ranch that is now the Nisqually National Wildlife Refuge. This restoration is in addition to a 140-acre project by the Nisqually Tribe. The Nisqually estuary is one of the last large estuaries in Puget Sound that can still be so fully restored. Most large estuaries, such as the Puyallup River in Tacoma or the Duwamish in Seattle, have been converted into deep-water industrial ports. 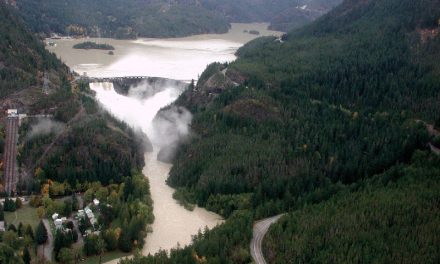