OLYMPIA – With the simple stroke of her pen today, Governor Chris Gregoire may have helped save the coast, the Strait of Juan de Fuca, the Puget Sound and the Hood Canal from the devastation of a major oil spill.

“A hell of a lot of work has gone into this simple signing of Senate Bill 5344 and it’s going to take a lot more to truly save these waters,” said Billy Frank, Jr., Chairman of the Northwest Indian Fisheries Commission, which serves the 20 Treaty Indian Tribes in western Washington. “The natural resources and environment we have here are precious beyond belief, and we all need to work together to save and restore them – Indian and non-Indian governments, individuals, industry and environmental organizations,” he said.

“Natural resource management always works better when state and tribal and federal governments work together, a Case in point-the rescue tugboat at Neah Bay,” said Makah Tribal Council Chairman Michael Lawrence. “We have been dedicated to making this happen for many years. This bill is something we have fought hard for because we believe in it, and we will never give up. We are Makah and our identity depends on it.”

The Governor signed Senate Bill 5344 today, commonly known as the tugboat bill amidst representatives of all levels of government as well as environmental organizations and industry, all of whom had worked on this or similar legislation for years.

“SB 5344 puts the payment for the tug where it belongs – in the laps of industry,” said Frank. “Industry brings in the tankers, freighters and barges from all over the world onto our waters. As long as that happens, they need to pay their fair share of the cost for prevention.”

“Having a year-round rescue tug stationed at Neah Bay is a critical task,” said Lawrence. “This is the crossroads of the Strait of Juan de Fuca and the Pacific, a place where weather can be wild, with unbelievably fierce storms, huge waves and ferocious winds. Yet it’s where hundreds of oil tankers and thousands of cargo and other vessels enter into our waters every year.”

It’s also a place where there have been incidents too numerous to count over the years, and where teams with the right training, aboard a tugboat with enough power and maneuverability and the right equipment could, without question, improve spill response capacity for the outer coast from the tragedy of a major oil spill such as the Exxon Valdez.

“That spill took place more than two decades ago now,” said Frank. “But I visited Prince William Sound just last year, and I can tell you – it’s still an oily mess. Yet, just three months after the Valdez incident, the oil tanker Bolivia, hauling three times as much oil, very nearly crashed off our coast at Neah Bay. And there have been many such close calls since,” said Frank.

“The tug that has been stationed here off and on with state funding for a number of years, and in fact, has assisted dozens of disabled vessels and prevented hundreds of thousands, if not millions of gallons of oil from being spilled,” said Lawrence. “We’ve seen the impacts of oil spills on the coast and in Puget Sound. It isn’t pretty. In fact, take my word for it – it’s downright ugly,” he said.

“All the tribes work hard, every day, to do what is needed to provide a healthy ecosystem for our children – all children – and for salmon, orcas and all other life here in the waters in the Northwest. That’s another effort we have to keep working on together – government-to-government,” said Frank.

“Let’s never let the threat of a major oil spill disaster destroy all that we are working for,” said Lawrence.

“This legislation is a great step in the right direction. We thank Governor Gregoire for signing it into law,” said Frank. 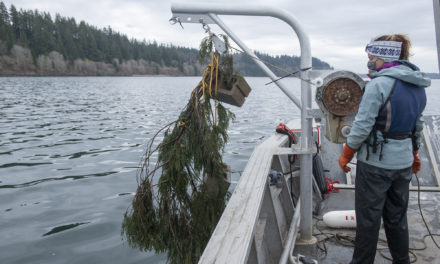