The Battle of the Species

Nature has established a rhythm through the millennia of our planet’s existence. It’s a rhythm that, for the sake of our children’s children, society cannot continue to ignore.

The result of society’s effort to ignore that rhythm anyway is playing out in the backyards of our ever-expanding neighborhoods. When Tabby, the crows and the raccoons battle each other for food on the back porches of those neighborhoods, it is really us who are fighting on the porch, and we must consider resolution with an eye toward our own survival.

Reports of house pets being killed by larger mammals in rural neighborhoods and suburbs are more frequent now. It’s easy to feel sorry for those pets and their owners. I know I do. But let’s not forget about where the fault lies with this problem. It doesn’t rest with the cougar or the coyote that wanders into “civilized” areas. It lies with us. These animals are not encroaching on our territory, we are encroaching on theirs.

The battle of the species is one played out with increasing frequency because people and builders have expanded with little restraint or semblance of control. Society pushes deeper and deeper into forests and prairies until now there is little habitat for these animals, and that habitat which does still exist is fragmented in a million pieces.

Today you see houselights on the hillsides and mountaintops. Natural resources are pushed to the limit, and still the expectation is that human growth and urban sprawl will continue to expand exponentially.

There is no longer an artificial line between the wild and the “civilized,” a Seattle Times columnist wrote recently after looking out on his back porch to see a large raccoon, an arched and hissing cat, and cawing crows swooping through the scene like fighter jets.

This incident, plus a number of reports of coyote sightings in his neighborhood, prompted the writer to contact the Washington Department of Fish and Wildlife. They told him predators are a part of the natural ecosystem and that if we want to have balanced, healthy ecosystems, we’ve got to have predators – that predators are part of the urban habitat just like people. Since we’re going to be living together, we need to make it work.

But if we continue on the path we are on now, a day will come when there will be little if any wildlife other than those species that have adapted to living with our “civilization,” species like rats.

Some folks argue that people count for more, that pets are part of our families, and that they are therefore more important than wildlife. What they don’t seem to realize is that the deer, fish, bear, cougar and other species are part of our family, too, and like any strong family, we must work at getting along. 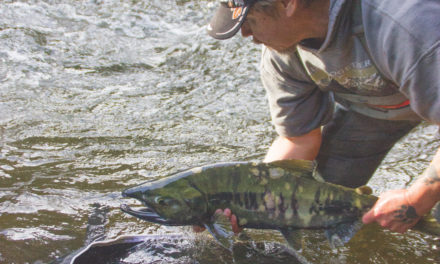 Status Of Things To Come