SWINOMISH RESERVATION (April 23, 2007) – Members of the Swinomish Tribe are eating less seafood than they used to, but many of them would like to eat more, according to a study recently completed by the tribe’s Water Resources Program.

The study found that most tribal members are currently eating safe amounts of shellfish.

“Overall, it’s healthier for people to be eating seafood,” said Jamie Donatuto, environmental specialist for the tribe and coordinator of the research. Medical journals have confirmed that except in site locations of extreme contamination, the health benefits of eating seafood outweigh the risks from possible contamination.

These benefits are especially critical to Indian people, who tend to suffer from higher rates of diabetes and high blood pressure. Eating fish and shellfish also is important to the cultural health of the community, Donatuto noted. “When you cut out seafood from your diet as a tribal person, you’re losing more than just the health benefits – seafood is an integral part of the community structure,” Donatuto said. “We’re encouraging tribal members to continue eating fish and shellfish.”

Sediment, clams and crabs collected from the waters around the Swinomish Reservation on Fidalgo Island were tested for toxic contamination. The results and recommended consumption limits from each of the traditional harvesting sites are posted online.

The contamination levels at the sites most often used by tribal members were found to be low enough for risk assessors to recommend eating two meals a week of crab or clams.

“People already are avoiding the sites with the most pollution,” Donatuto said.

Throughout the study, tribal members were kept informed through stories published in local and tribal newspapers, broadcast on the tribal television station and featured on the Swinomish Web site. Staff also made numerous presentations to tribal and non-tribal groups.

The Herald: State, Tulalips disagree on whether wild chinook should be released 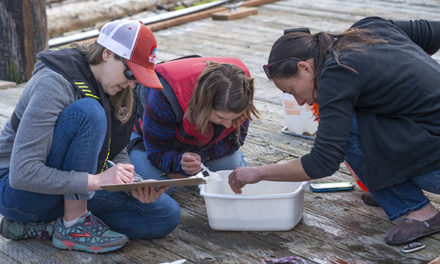