The Swinomish Tribe is getting back into the oyster business after a nearly 50-year hiatus.

The tribe cultivated oysters from 1935 to about 1969 on the tidelands of Padilla and Skagit bays.

“My 85-year-old father worked at the commercial oyster operation at our fish plant back in the 1950s,” said Swinomish Chairman Brian Cladoosby.

Swinomish plans to grow Pacific oysters on a 55-acre Similk Bay property it purchased from private landowners in 2013.

“When the Morgan family came to us about buying the land, I’m glad they turned to us because they never have to worry about us selling it ever again,” Cladoosby said.

The tribe plans to sell the oysters, in addition to serving them at tribal events and ceremonies, and eventually expand by growing other species.

“We have lost so many of our treaty-protected natural resources because of degraded habitat,” said Lorraine Loomis, Swinomish fisheries manager. “Our shellfish farm will provide a traditional food to tribal members, and also make sure these tidelands continue to support harvest for future generations.”

The oysters will be grown in bags tethered to the beach, using eco-friendly materials, said Stuart Thomas, the tribe’s shellfish farm manager and aquaculture biologist. The bag-on-bottom method allows the seeds to move freely when waves hit, abrading the shells to stimulate growth and create a deep-cupped oyster.

“Oysters are a food source that were once plentiful here,” Thomas said. “These are some of the best waters for rearing shellfish.”

At a recent blessing of the new venture, Thomas referenced the tribal adage, “When the tide is out, the table is set.”

“We want to make sure the table is set,” said Swinomish Vice-Chairman Brian Porter. “We’re salmon people, but we also live off the land.” 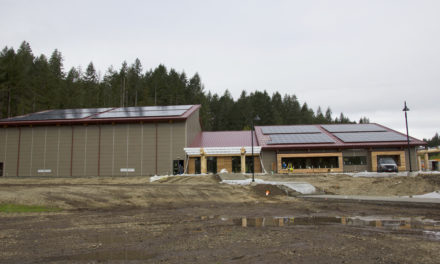