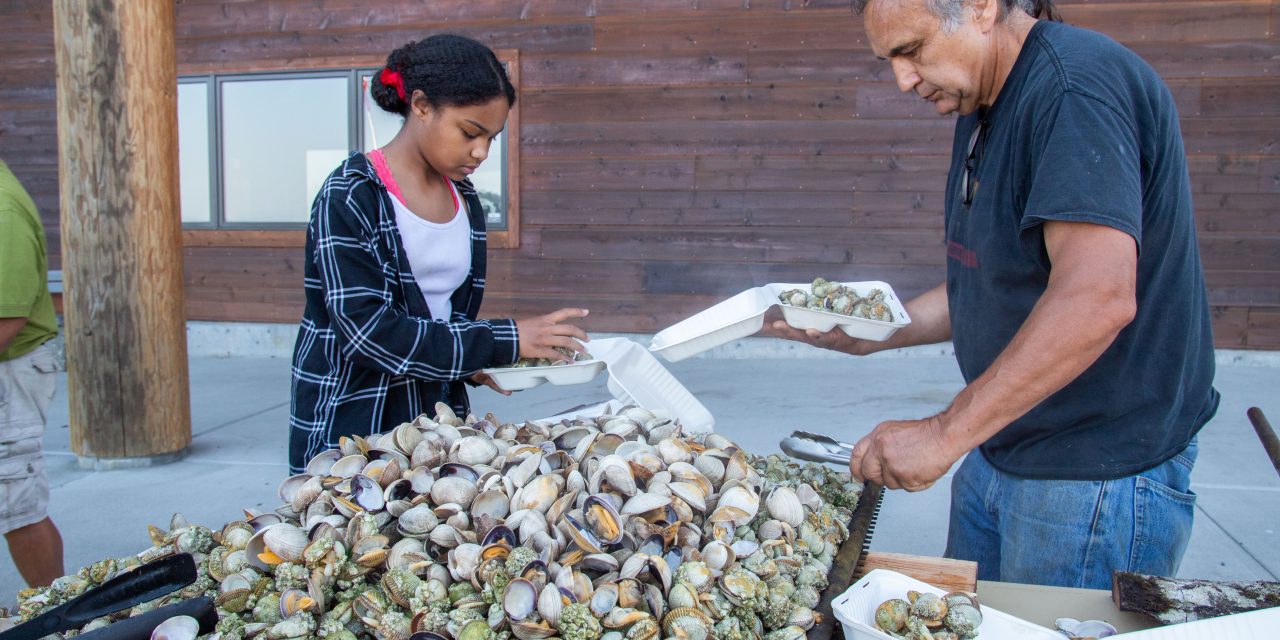 “Historically, with the decline of the cockles, it’s almost impossible to get enough to feed a family,” said Jay Mills, a Suquamish tribal councilman and fisherman. “It’s so important – it’s the memories of being able to go to the beach and bring home a bucket of cockles to share with your grandmother, mother, and aunt and uncle.”

Mills helped initiate the project after speaking with the tribe’s shellfish staff about reviving the local cockle population. The tribe started by harvesting samples of adult cockles from the beaches at Kiana Lodge and George Lane near Agate Pass in 2018, then worked with the Puget Sound Restoration Fund to spawn and raise the offspring.

The juveniles were transferred to the tribe’s shellfish nursery in Brownsville and reared to adults. In 2020, the cockle seed were relocated into protective mesh bags and placed on the beaches off George Lane until they were harvested in summer 2021.

“We have preliminary genetic data showing that there are only very small genetic differences between populations within the main body of Puget Sound, so we hope to move toward some direct seeding of cockles, as well as possibly transferring cockles from geoduck tubes onto local beaches in future, rather than containing them in bags,” said Elizabeth Unsell, a Suquamish Tribe shellfish biologist.

Nearly a dozen tribal members and staff spent a July day retrieving and sorting through dozens of bags of cockles from the beach in prep for the first community cockle clam bake.

The shellfish were steamed at the tribe’s community fire pit at the House of Awakened Culture after which the staff from the fisheries, tribal youth, traditional foods and culture departments handed out to-go boxes filled with cockles to tribal members during a drive-through clam bake.

“Working with tribal members to make such an important traditional food available through multiple community cockle bakes has been extremely rewarding,” Unsell said. “Cockles are a very interesting, delicious, and sensitive species, which they continued to demonstrate throughout the grow-out process.”

This project was an effort to serve the community. Elders as well as younger tribal members have observed the cockle population diminishing over the past few decades, Unsell said.

“What happened this year was a start – I think it could really help our members get back to their traditional foods they are accustomed to,” Mills said. “If we can learn from this to make it better for future generations, it will be important.”

Cisse Trawally, with her grandfather Rob Purser, fisheries director for the Suquamish Tribe, put together to-go boxes of manila clams and cockles for the tribe’s drive-thru community clam bake in July 2021. Story and photo: Tiffany Royal

Follow the First Stewards Symposium on the live blog

The Olympian: Removal of Dams Key to Elwha River Restoration