HOH RESERVATION (Feb. 27,2002) — Steven Penn, Hoh tribal fisherman, is enjoying a day of fishing despite a couple of things that might have caused other fishermen to call it a day. The 60-something Penn doesn’t have a truck at the moment – it’s in the shop. His boat motor isn’t working either, so he uses a pole to propel his motor-less boat out to check his net.

To top it off, the steelhead numbers are few this week, but Penn smiles anyway. “I’ve lived here all my life except for about seven years when I worked as a welder. I have been fishing my whole life,” Penn said. “I used to fish for money; now I fish because I like being outside,” he said.

The small Hoh Tribe, located near the mouth of the Hoh River on the Olympic Peninsula, has always depended on fishing. Steelhead are important because they return over a longer time (four months) and at a time when there are no other species of fish to catch. The bright steelhead bring only a slightly better price than their coho cousins, but the fish are also important for cultural ceremonies and provide food for a tribe that faces an unemployment rate of more than 50 percent during the winter.

“I work for the tribe when there is work available, but it’s usually in the summer,” said Penn. He has helped clear logging debris, typically small leftover cedar spalts, from miles of clogged streams in past summers to provide more spawning and rearing habitat. “We need to keep doing that program so fish have a place to go. If you have more fish returning, but no place for them to spawn, you can’t improve the populations,” he said.

As he picks a few steelhead from his net, he finds one with the bite of a seal, which constantly threaten his catch. The seals roam far upriver in search of fish and the nets offer an easy meal if not tended closely.

While Penn works, fellow tribal member Howard Hudson comes to the landing to meet his son, who is bringing in his catch. “The price isn’t so good, but I was able to trade some fish for Dungeness crab from another fishermen,” said Hudson. “That’s a good trade and we’re both happy.”

A day’s catch and net floats form a mosaic in the bottom of a  fishing boat. Photo: D. Preston

Hudson’s son, Joe, motors down the river, his dog yapping with excitement in the bow. He pulls in with fewer than 10 fish. “The price is bad for fish right now, but we can’t control that. I like being on the river. I’m comfortable there,” he said.

Rearing of hatchery steelhead for release into the Hoh River occurs at the Quinault National Fish Hatchery at nearby Cook Creek. Approximately 100,000 fish are released each year into the Hoh. Half are transferred in February to begin final rearing at the tribe’s reservation hatchery, from which they are ultimately released. The other half are transported in early May for immediate release several miles above the reservation. The hatchery steelhead begin returning in December. The larger portion of the wild run usually begins returning in February.

The Hoh Tribe, as a co-manager of the resource, assesses spawning escapement of the wild steelhead runs based upon comprehensive spawning ground surveys. Escapement is the number of fish allowed to pass upstream and spawn so that a run can be sustained at a desired level.

To accurately assess wild and hatchery harvest impacts the tribe keeps close track of the makeup of its fishermen’s harvest by sampling a high proportion of the catch, separating the numbers of hatchery and wild fish caught.

“We work with the Washington Department of Fish and Wildlife to determine the appropriate management of salmon and steelhead stocks based on our most recently finalized and historic information,” said Jim Jorgensen, Hoh tribal fisheries biologist. The tribe has also instituted a strong program to monitor and provide input on habitat issues that affect fish, Jorgensen said. The program monitors ongoing habitat conditions and assesses the potential impacts of proposed land-use activities on fish habitat within the Hoh Basin.

“The tribe has a very limited ocean fishery here, further increasing the relative importance and reliance of tribal members on the in-river fisheries, particularly the steelhead as it provides the longest fishery,” Jorgensen said. 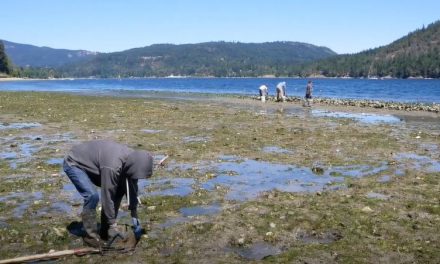