“The snapshot we cover in this report covers the years around the beginning of the Great Recession and the years the economy started to improve,” said Lorraine Loomis, chair of the Northwest Indian Fisheries Commision. “You might think we’d see an improvement in some numbers, but all we see is a steady decline in salmon habitat.”

In addition to regional reports about Puget Sound and the Olympic coast, the report is broken down into tribal areas of interest. This is the third edition of the report, which is available in its entirety at: http://geo.nwifc.org/sow

The amount of land covered by impervious surface increased from 6.59% in 2006 to 6.76% in 2011. This means that in many urbanized areas, we’re seeing more watersheds that are approaching the point that they might never be recovered.

Why is impervious surface an important thing to consider for salmon?

As impervious surface increases in a watershed, stream temperatures and sediment transport are likely to increase and instream biodiversity decrease by reducing the number of insect and fish species. (Impervious surface) contributes to pollutants in stormwater runoff, which can contaminate local aquatic systems. Contaminated runoff poses significant threats to freshwater, estuarine, and marine species, including the Pacific Northwest’s salmon and steelhead runs. The addition of impervious surface reduces water infiltration and increases runoff, causing higher peak flows during wet times and lower dry weather flows due to lack of groundwater recharge.

Between 2006 and 2011 forest cover declined in nearly every watershed and by 153 square miles overall. This is an area larger than the city of Seattle.

The forests we have left aren’t working for salmon

Streamside forests provide shade and cool, clean water for salmon, but only about 17% can be considered properly functioning. This is down 2% from 2006.

What do streamside forests do for salmon?

We know that shoreline modifications, things like bulkheads and docks, hurt salmon as they migrate out to the open ocean. They make it harder for salmon to find food and make it more likely they’ll become food. Despite this, new shoreline modifications continue to outpace restoration. For example, in Pierce County the rate of new construction to restoration was higher in every year but one.

Why are natural shorelines important for salmon?

Natural shorelines form a migratory pathway for juvenile salmon, which use pocket estuaries “located at the mouths of streams and drainages, where freshwater input helps them to adjust to the change in salinity, insect production is high, and the shallow waters protect them from larger fish that may prey on them.” In addition to high-quality insect prey, migrating salmon fry feed on forage fish that spawn along shorelines. These effects have caused a decline in growth and lower survival rates.

What should we do now?

The steps we need to take are simple, but will take a lot of work.

Declare a statewide emergency for salmon. Engage state agencies with regulatory authority – as well as the public – in the effort.

Stop permitting habitat loss. Place a moratorium on development permits until the process can be revised with standards that prevent further habitat destruction.

Make sure our water is clean. Complete the revision of current water quality rules for human health, then move quickly to update criteria that protect fish. Also, improve stormwater rules to better control the flow of toxics into our waters.

What happens if we don’t turn the tide?

Lorraine Loomis, chair of the NWIFC:

Unfortunately the findings depicted here are grim; we are losing the battle for salmon recovery because we are continuing to lose habitat faster than it can be restored. Unless we can slow, stop and reverse this trend, salmon will continue to disappear along with our treaty rights.

This summer, treaty tribes, along with their state co-managers, are constricting salmon fisheries across the region. While this year’s fisheries were a direct result of poor ocean conditions, they are also a look into the future.

If we had protected salmon habitat in the last few decades, we would not have had to make such hard choices this year. Loomis:

“These fisheries closures are the direct consequence of the state of Washington allowing the destruction of salmon habitat for decades. Dips in ocean survival will happen every so often, but we wouldn’t have to drastically cut back our fisheries if a better job was done protecting the habitat.” 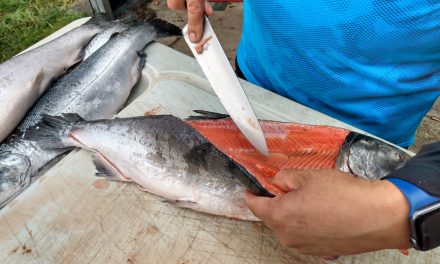 To Swinomish fish cook, treaty rights come down to feeding the people