Standing Up For Salmon

OLYMPIA (March 5, 2008) − At the expense of the salmon recovery effort, recreational interests have delayed plans to restore crucial chinook habitat in Wiley Slough, in the South Fork of the Skagit River delta. Puget Sound chinook salmon are listed as “threatened” under the federal Endangered Species Act.

Restoration work was set to begin last summer to return tidal flow to a 157-acre parcel of land around Wiley Slough. Project partners, including the Skagit River System Cooperative and state Department of Fish and Wildlife (WDFW), identified the area as a priority for estuarine restoration in accordance with 2003 state legislation to restore public lands for salmon recovery before looking to private land.

The parcel, also known as the Headquarters Unit of the Skagit Wildlife Area, was acquired by the state in 1962 through a land swap with the U.S. Fish and Wildlife Service. The estuary was converted for recreational use – and the salmon habitat destroyed – through dikes, drainage ditches, culverts and tide gates.

Since then, Wiley Slough has been used for put-and-take pheasant hunting, wildlife viewing, dog training and migratory bird hunting. To enhance the site for hunting and bird watching, 100 acres were planted each year with cereal grains to bait waterfowl. The area also features easy foot access for hunters and a 2.4-mile loop trail popular with hikers.

It is widely agreed, from the standpoint of salmon recovery, that it was a mistake to convert this land from estuarine habitat to recreational use. As the natural resource arm of the Swinomish and Sauk-Suiattle tribes, the Skagit River System Cooperative is working with WDFW to restore the estuary for salmon use.
Some recreational users, however, oppose the loss of this easily accessible hunting and wildlife viewing area. The state Legislature has put the Wiley Slough project on hold until its opponents are satisfied that the loss of recreational opportunities will be mitigated. The cost burden of investigating mitigation options is likely to fall on the salmon recovery effort.

The tribes already have lost five decades of salmon productivity because of the state’s decision to dike and drain Wiley Slough. The salmon recovery effort already is bearing the cost of fixing this habitat degradation. The Skagit River System Cooperative along with their project partners have secured $2.5 million in federal grants toward the project; in addition to $2 million that has been funded through the state Salmon Recovery Funding Board and Puget Sound Nearshore Partnership.

One option being pursued by recreational interests and some legislators is to require restoration proponents to establish new recreational sites elsewhere in order to replace recreational opportunities lost at the project site. By placing such a financial burden on this project, and others in the future, the state is effectively discouraging future efforts to restore salmon habitat. If we are to succeed in recovering ailing salmon populations, this cannot happen to every project that involves a change in land use. We want to be able to work with recreationists, as well as other communities to improve the quality of life for everyone in our region. Restoring salmon is vital to that objective.

It’s time for everyone to stand up for the salmon. 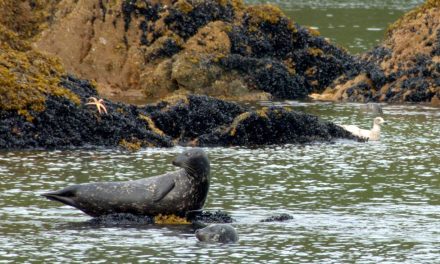 Tribes Team Up with State on Harbor Seal Survey

Being Frank: Life Without The Orca?

Salmon are for everyone