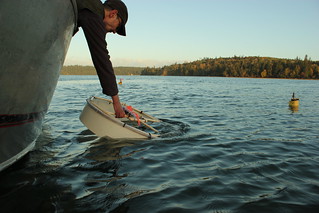 The Squaxin Island Tribe and the state Department of Health are conducting a water circulation study in Chapman Cove to learn more about persistent pollution in the important shellfish growing area. “The study will help us understand just how tidal currents spread upland pollution around Oakland Bay,” said John Konovsky, environmental program manager for the tribe.

Using drogues – kite-like devices suspended beneath a buoy and pulled along by currents – tribal staff can determine how upland pollution is carried to different parts of the cove. Geographic Positioning Systems (GPS) devices are attached to the drogue buoys, so each can be precisely tracked.

Chapman Cove is situated on Oakland Bay in deep South Sound. The cove has been closed to shellfish harvesting for five years because of fecal coliform pollution. In recent years, Mason County has been able to track and clean up several failing septic tanks near Chapman Cove, but pollution in the cove persists.

“Once we get a clearer idea of exactly where water in the cove comes from, we’ll have a much better plan of action to clean up the bay,” Konovsky said.

The Squaxin Island Tribe is part of a larger partnership to clean up Oakland Bay. “Recently, several other parts of Oakland Bay were upgraded for shellfish harvesting,” said Andy Whitener, natural resources director for the tribe. “While our efforts to clean up the bay are starting to see success, Chapman Cove still needs some work.”

Oakland Bay is the nation’s leading source of manila clams and the center of the Squaxin Island Tribe’s shellfish culture and economy. Several shellfish growers are among the top employers in Mason County.

“Shellfish has always played a major role in the tribe’s economy,” Whitener said. More than 20 percent of the tribe’s membership make a good portion of their income harvesting shellfish. The tribe also owns a company that buys and sells shellfish.

“Cleaning up and keeping clean places like Chapman Cover is also vital to preserving our culture and our treaty reserved rights,” he said.