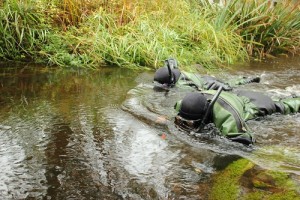 Candace Penn and Michael West, Squaxin Island tribal staff, look for juvnille coho that might be using a small stream in the Deschutes watershed.

The Squaxin Island Tribe is conducting snorkel surveys throughout the Deschutes River watershed, looking for stretches where coho go to feed and grow.

Each spring for the last three years, the tribe has released 100,000 juvenile coho into the Deschutes. They then follow up for months with snorkel surveys to see where the fish go. “What we’re looking for is coho habitat to protect and restore,” said Scott Steltzner, salmon biologist for the tribe. “And, obviously, the coho know where the best coho habitat is.”

The problem, however, is that low runs of coho to the Deschutes in recent decades mean there aren’t even enough coho to fill the available habitat. “We can guess what sort of habitat coho want, but the best way is to get out there and find out first hand,” Steltzner said. “But, to find where the good coho habitat is in the Deschutes, we need to put some coho in the river first.”

Because coho salmon spend an extra year in freshwater before heading out to the ocean, they are more dependent on river habitat than other salmon species.

In the past, the Deschutes River was the largest producer of coho in deep South Sound. Coho have been returning in low numbers for over 20 years since a landslide sent tons of sediment into the river. “The landslide wiped out coho in their main stronghold on Huckleberry Creek and they haven’t been able to re-establish themselves,” Steltzner said.

New forest practice rules put into place since the landslide would likely prevent the same type of catastrophic event from happening again.

The tribe will use the information from the snorkel surveys to plan on-the-ground restoration and protection efforts. “Finding where salmon rear in the Deschutes is the single largest data gap in proceeding with much-needed habitat work,” Steltzner said.

“Our way of life, our culture and economy have always been based around natural resources,” Whitener said. “Protecting and restoring salmon habitat is the most important thing we can do to restore salmon in the Deschutes and protect our treaty right to fish.”

Yakima Herald Republic: Where were the elk? Ask the rumor mill