SHELTON (September 29, 2003) About ten thousand years ago a glacial lake north of Shelton overflowed its banks, creating what is now Johns Creek. Needless to say, things have gotten a lot warmer since glaciers crept this way. But, the temperature of Johns Creek may have gotten to the point that it is hurting salmon. “Salmon need cool water in order to grow in freshwater and when they return to spawn,” said John Konovsky, Water Quality Biologist with the Squaxin Island Tribe. “Coho salmon especially, because they spend as long as 18 months in freshwater as juveniles, depend on cool water.”

The Squaxin Island Tribe is mapping temperatures on three main tributaries into Oakland Bay, including Johns Creek, to explore how stream temperatures might be connected to declining salmon runs. In late summer tribal consultants using Forward Looking Infrared Radar (FLIR) made flights along the three creeks, Johns, Cranberry and Mill. FLIR technology allows researchers to find “hotspots” in surface water temperatures and gives them access to the full picture of water temperature throughout the stream. In conjunction with the helicopter flights, Squaxin Island staff walked each of the streams, dragging behind them a temperature gauge to gather underwater temperatures data.

“Typically, we don’t get such broad temperature information,” said Konovsky. “Even if we put hundreds of temperature recorders in a stream, we wouldn’t get the entire picture that FLIR gives us.” Using FLIR technology, literally every square foot of surface water temperature is mapped. And, with the additional underwater data, the tribe will have an almost complete picture of temperature problems on the creeks.

Using instream temperature monitors, or thermographs, the tribe has been monitoring temperatures in local streams for years. “Other local streams, such as Goldsborough Creek, don’t have the problems that we see every year in the other creeks we monitor, especially Mill and Cranberry Creek,” said Konovsky. “These streams have shown over the years to have pervasive temperature problems.”

Just as important to the tribe as the surface temperature data provided by the FLIR flights, will be more straight forward aerial photos that where also taken during the flights. “This will be one of the few times that these creeks are going to have up close-up pictures taken of them,” said Konovsky. “We’re taking the opportunity to examine what the tree cover around the streams.” If thin stands of trees are found near stretches of stream with higher water temperatures, simply restoring those stream side trees might solve the problem. If a lack of trees isn’t the issue, other causes might include widening of the stream bed or a lack of groundwater making it to the stream.

The Squaxin Tribe is especially concerned with how rising temperatures might be causing declining runs of coho salmon. “In many of the streams we are looking at we are seeing steady declines in coho runs and we’re seeing parallel increases in temperatures,” said Konovsky.

“Over the years, coho salmon have been the steadiest provider for us,” said Jim Peters, Natural Resources Director for the Squaxin Tribe. “We have seen dangerous declines in the wild runs of coho for the past few decades. We need to protect the remaining coho habitat and repair what we can so we can start reversing that trend.” 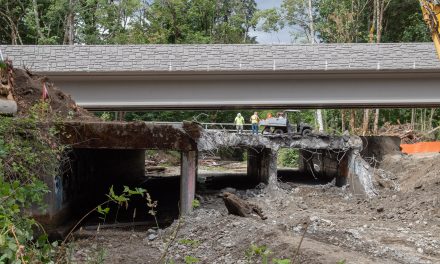 Nisqually Tribe (among others) closes fishery to protect salmon