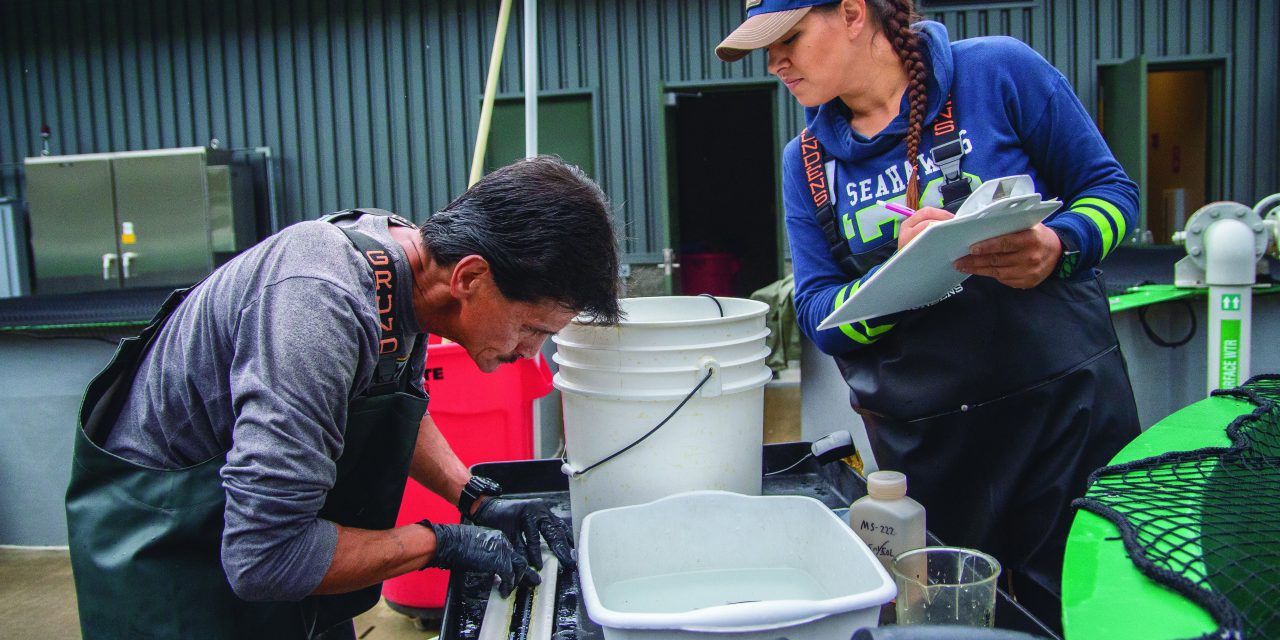 The Skokomish Tribe and Tacoma Power are bringing back sockeye salmon to the North Fork Skokomish River and Hood Canal.

“Our goal is to restore a sustainable run that we haven’t seen since the river’s dams were built,” said Dave Herrera, the tribe’s fisheries policy representative.

The Lake Cushman and Lake Kokanee dams were built in the 1920s to provide hydroelectric power for the city of Tacoma but lacked fish passage facilities and dewatered the North Fork.

“The long-term goal is to pass fish around the dams between the upper and lower watersheds of the North Fork, but the population numbers need to increase first, so we’ve implemented recovery programs for chinook, coho, sockeye and steelhead,” said Andrew Ollenburg, Tacoma’s Cushman Fish Facilities manager.

Every fall since 2016, the sockeye hatchery on Hood Canal has incubated eggs from Puget Sound Energy’s Baker River stock. The following spring, sockeye fry are placed in rearing tanks until the summer when they are transferred to Lake Cushman to acclimatize. The fish are released into the river to out-migrate to the canal and ocean for three to four years before they come back to the river as adults.

The hatchery also makes a thermal mark on the fish ear bone, or otolith, by dropping the water temperature for varying lengths of time, so staff can later determine the age of returning fish.

The fish are not clipped so they will not be harvested, allowing more sockeye to return to the river. Any sockeye that show up at the hatchery will be brought into the spawning program.

Sockeye returning this year from the 2016 release would be considered 3-year-olds, Ollenburg said, with more expected next year as 4-year-olds.

“After nearly 100 years of conflict over the Cushman dams, the settlement agreement has led to a real partnership between the utility and the tribe,” Herrera said. “The tribe took the lead in securing the broodstock for the hatcheries, supported the securing of federal energy funds to help pay for the construction of the fish passage facilities, and the tribe’s fisheries staff now do monitoring work for Tacoma in the North Fork and estuary of the Skokomish River.”

Adult chinook are collected at the state’s Marblemount Hatchery on the Skagit River and spawned in August. The eyed eggs are taken to the Tacoma Power’s North Fork Skokomish Salmon Hatchery in October, tagged with coded-wire tags and raised to subyearling and yearling release groups.

The steelhead broodstock comes from the North Fork Skokomish River. Tribal biologists and technicians pump about 15,000 eggs from steelhead redds each spring and bring them to the hatchery for incubating and rearing. As juveniles, they are given coded-wire tags and clipped to distinguish them from the existing natural-origin steelhead population in the North Fork. They are released the following spring.

Tacoma brings in about 10,000 coho fry from a screw trap on the North Fork Skokomish River to supplement the run. The fry are brought in from the screw trap in May and released the following May as yearlings.

Statement from Lorraine Loomis on the passing of Gov. Mike Lowry