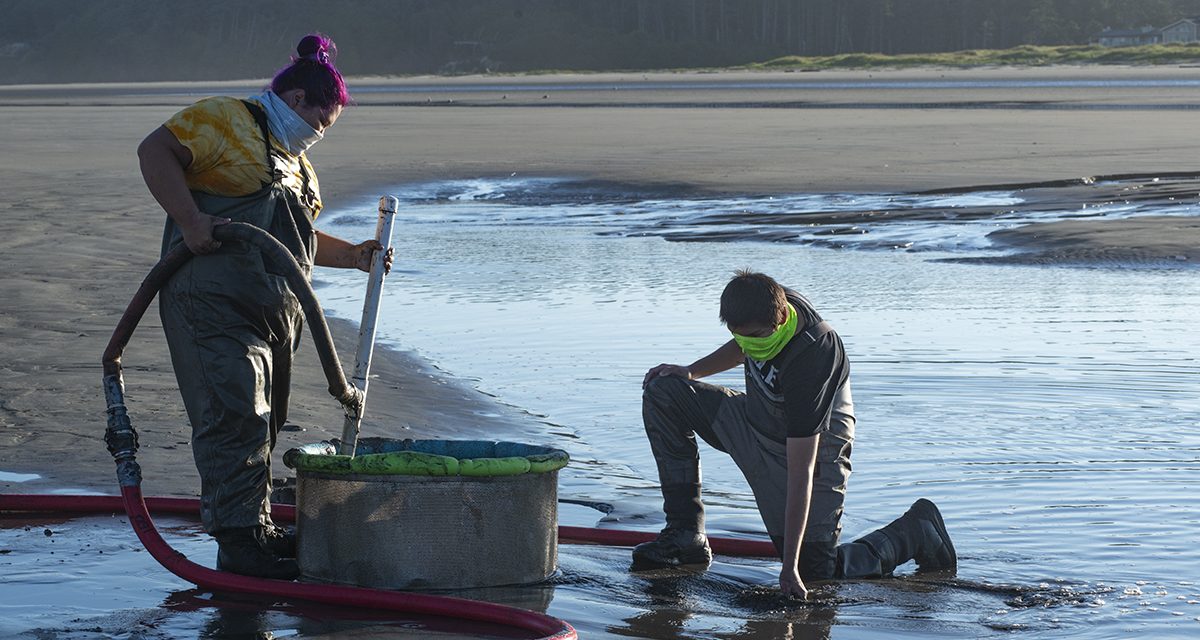 Not only was this the third year without a blueback fishery, the pandemic also stifled the market for most other fisheries. In their absence, razor clams provided sustenance to tribal members.

With more than 9 million clams available for state and tribal harvest on two co-managed beaches (Copalis and Mocrocks), it could be one of the best harvest seasons ever. However, COVID -19 may prevent nontribal digs with thousands of participants at a time. For QIN, it’s easy to physically distance a few hundred people on several miles of beach.

It’s hoped that warmer waters don’t lead to a bloom of Pseudo-nitzchia, the plankton that produces domoic acid, which can accumulate in the clams. In high levels, domoic acid can sicken or kill humans, though it does not harm the clam. QIN digs began this month.

QIN is one of the few places on the West Coast with a facility to can razor clams, making it possible for tribal members to harvest razor clams commercially. The clams are popular for crab bait and also for steaks purchased by consumers.

“Every QIN tribal member who can get out there with a minimal investment in a shovel and small mesh basket can make a couple hundred dollars in one night if they are really pushing it,” said Scott Mazzone, shellfish and marine fish biologist for QIN. “That buys Christmas presents, clothes and shoes and puts clams in the freezer for the next several months.”

During such plentiful seasons, razor clams are often on the menu at the Quinault Beach Resort and Casino in Ocean Shores. QIN razor clams are also listed as the best choice for sustainably harvested razor clams on the Monterey Bay Aquarium’s Seafood Watch website.

Quinault Indian Nation fisheries technician Angel Ellis pumps razor clams to the surface from a survey plot while co-worker Albert Hawkes grabs an escapee. The clams are measured and counted and returned to the sand.

How the Squaxin Island Tribe is boosting shellfish populations