CLALLAM BAY (December 1, 2004) – It’s not often that removing a road will provide better access, but for fish it does just that.

Salmon and trout in the Clallam River now have more access to spawning and rearing habitat after an old logging road along the river was partially removed and closed in August. The joint project between the Lower Elwha Klallam Tribe and the Washington Department of Natural Resources involved removing landfill, culverts and a bridge along the nearly 1-mile stretch of road near Clallam Bay.

“This was an old logging road that had essentially become unnecessary,” said Mike McHenry, fisheries habitat manager for the Lower Elwha Klallam Tribe. “In order to improve salmon habitat along a portion of the Clallam River, we decided to take out as much of the road as possible, remove any fish barriers and replant native vegetation.”

Two culverts, and the landfill around them, were removed from the road. In their place, large ravines now dissect the road, allowing two unnamed streams to flow into the Clallam River. With better access to the tributaries, salmon and trout can now reach important spawning and rearing habitat. Removing the clay landfill reduces the risk of sediment flowing into the river, degrading water quality and possibly harming salmon spawning nests.

A 60-foot bridge that crossed the Clallam River also was removed. The bridge was dismantled and the large wood beams used to make the span were placed in the river to help create logjams. Those logjams will provide shelter for juvenile fish and slow the stream, creating pools and riffles essential for spawning salmon. The Clallam River supports coho and chum salmon populations, as well as steelhead.

Portions of the road were graded at different slopes, and the entire stretch also was seeded with grass and covered with hay to control erosion.

“The plan is to let nature take over this area and allow what’s left of the road to become part of the landscape,” said Eric Carlsen, Public Works Engineer for the Washington Department of Natural Resources. “This was a great cooperative project, because this work will improve habitat for fish and wildlife along this stretch of the river.”

The tribe’s portion of the work – removing the bridge and placing the logs in the stream – was paid for with a $10,000 grant from the Pacific Coastal Salmon Recovery Fund. DNR provided $76,240 for the state’s portion of the project.

“By removing this old road, we have reduced the risk of sediment flowing into the river and further degrading the habitat, and we have limited access to some sensitive areas,” McHenry said. “This project will benefit salmon and trout populations in the Clallam. The hope is we can do more cooperative habitat restoration projects in the near future.” 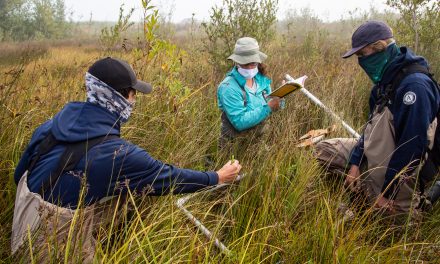