In 1999, a wetland inventory identified 54 wetlands on the Swinomish Reservation and assessed 36 of them for functions such as flood and stormwater control, base flow and groundwater support, and shoreline and erosion protection.

“We realized that standard wetland inventory and functional assessment methods could not adequately identify wetland functions related to tribal cultural values,” said Todd Mitchell, Swinomish environmental director. “We are fortunate that as the tribal government and regulatory authority, we are able to incorporate cultural values within our policies.”

Using notes from 1950s interviews with Skagit River tribes’ elders, and interviews conducted with Swinomish elders in 2003, as well as other sources, the tribe’s Department of Environmental Protection developed a list of 99 wetland plants with cultural importance to tribal members. They range from the common, such as Western red cedar and Nootka rose, to those that have become harder to find, such as camas. The plants were categorized by type: trees, shrubs, ferns, aquatics and grasses; and ranked in terms of use: construction, household value, medicinal, subsistence and spiritual.

“With this traditional environmental knowledge incorporated into wetland assessments, we hope to reassess and revalue the wetlands on the Swinomish Reservation to better protect and preserve them for both cultural uses and ecological functions,” Mitchell said.

A plant ecologist was hired in 2016 to survey the reservation wetlands to tabulate the culturally important vegetation and rank the wetlands.

“These cultural rankings will be used to update the state ranking system and the now-outdated functional assessment that was done in 1999,” said Nicole Casper, water resource analyst for the tribe.

The rank can be used to determine buffer widths and permitted uses in and around the wetlands, and be incorporated into a Shoreline and Sensitive Areas ordinance. 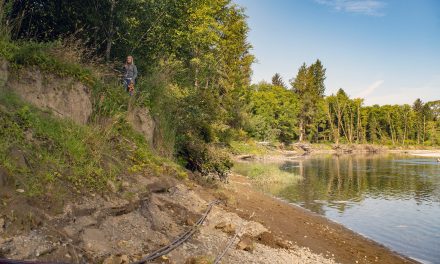