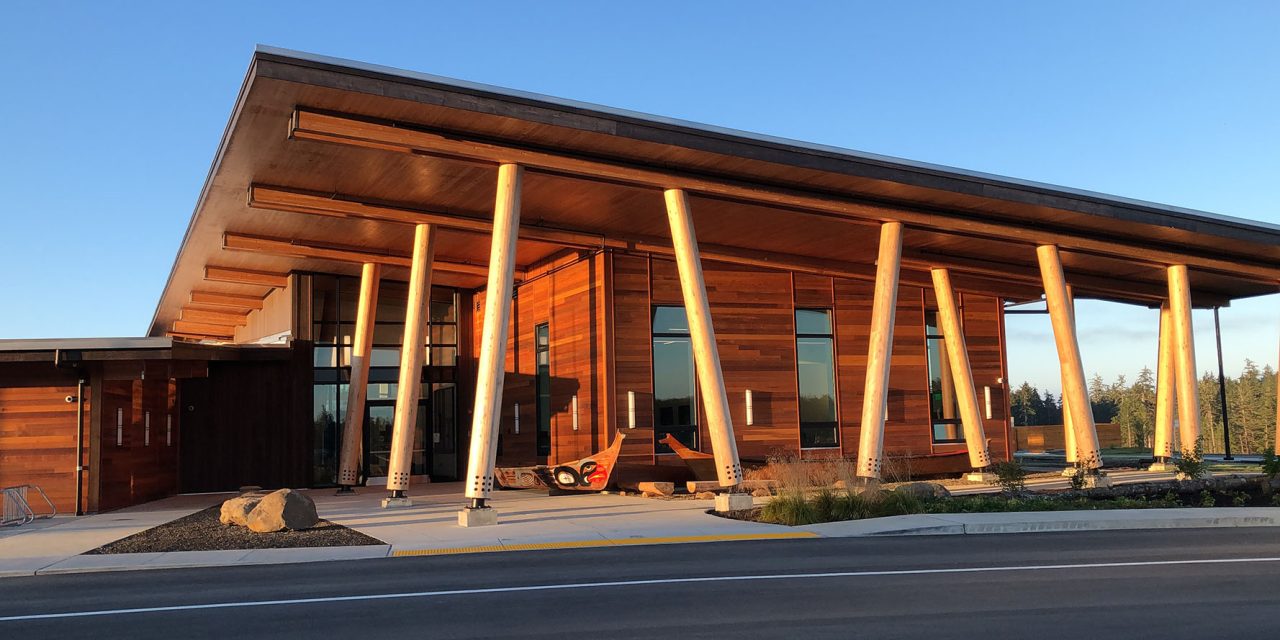 The Quileute Tribe’s Move to Higher Ground initiative achieved a milestone this summer with the blessing of the new Quileute Tribal School in August.

The tribe’s previous school was on a former U.S. Coast Guard site between the Pacific Ocean and Quillayute River. The K-12 school was only a few feet above sea level and threatened by tsunamis and storm surges.

That threat has now been warded off, thanks to a decades-long effort by the tribe and partners to build a new school in a safer location. At the blessing August 5, Quileute Tribe Chairman Doug Woodruff recognized the long path—and years of dedication—that helped make it happen.

“Our focus has always been the safety of our children and moving the tribal school first was always our priority,” he said. “When I say the passage of the legislation was a short 10 years ago, I can not emphasize enough the amount of incredible work and dedication that it took between then and today to make this celebration possible. I know many people did not believe today would ever happen, but they clearly underestimated the commitment and passion of the people in front of me.”

Built with a design reflecting the tribe’s culture, the new school has a full-size gymnasium, performing arts stage, athletics field and vocational shop.

“It will definitely be a better learning environment not having to worry about an earthquake or tsunami hitting us,” said Lizzie, a student who attended the previous school for five years. “I am most looking forward to the new equipment we will be able to use during our free time at school, especially in the gym. You know a lot of us tribal kids are sporty and enjoy the game of basketball. We  enjoy learning in a safe environment where we know we are going to be okay during a tsunami or an earthquake.”

In 2012, President Barack Obama signed legislation transferring 785 acres within Olympic National Park to the tribe, which previously had been relegated to a 1-square-mile area increasingly threatened by tsunamis and storm surges. The tribe had advocated for such a move for years to allow its citizens and culture to flourish.

The tribal school was the highest priority in the tribe’s Move to Higher Ground initiative, which will relocate important community facilities and future housing to lands out of the reach of tsunamis and floods, but it’s not the only envisioned project. Future stages include an area that encompasses an elder center, tribal government and cultural facilities, a justice complex, residential areas and parks.

“We all benefit from shellfish agreement”