Puyallup Tribe: Will a wall of warm water stop salmon?

The Puyallup Tribe is keeping a close eye on the harm caused by warm water to salmon returning to the river, including hundreds of thousands of pink salmon.

Will a wall of warm water prevent salmon from migrating into the Puyallup River watershed this year? High temperatures and low river flows are combining for what might be a remarkably bad salmon return.

To better understand the conditions, the Puyallup Tribe has more than doubled the number of temperature monitors in the watershed to 13 to track a feared “thermal barrier” to fish returning from the ocean.

“If the water in the lower river is too warm, its likely this fish will delay entry or go somewhere else,” said Russ Ladley, resources protection manager for the tribe. “Even if some fish do try to head upstream, they might die before they spawn because of the warm water.”

Warm water is deadly for salmon. If a stream’s water gets too warm, salmon have to expend more energy to survive, which can often lead to starvation. Diseases that kill salmon are also more virulent and spread easily in warm water.

Water temperatures on the White River, a tributary to the Puyallup, peaked at around 72 degrees in early July, before dropping back down.

In addition to high temperatures, flows in the lower Puyallup have been roughly half the norm. “This river depends on glacial ice melt and snowpack for much of its spring flow,” Ladley said. “There wasn’t enough snow for normal flows so far this year.”

Tens of thousands of coho and chinook are returning to the watershed during what is expected to be a scorching late summer. At the same time, hundreds of thousands of pink salmon will also be returning to the river. “We don’t have a good understanding of what those fish will do if they find warm water when they come back,” Ladley said. “We’re guessing they just won’t return or a lot of them will die before spawning.”

Tribal staff walk the streams each fall, tracking the migration and spawning patterns of these runs. “In addition to the temperature gauges, we should get a pretty complete picture of whatever is going on out there,” Ladley said.

The tribe has already seen the impact of warmer waters this summer. The tribe is pulling their smolt trap out of the mainstem Puyallup River about a month early, because there are too few fish to count. A smolt trap is a safe and effective device for capturing and counting out migrating juvenile salmon.

“The unusually low flows and subsequent velocity reduction has diminished capture efficiency to the point that it was no longer worth attempting to fish. 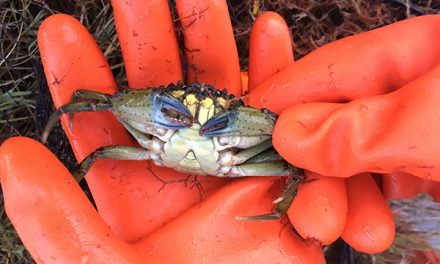