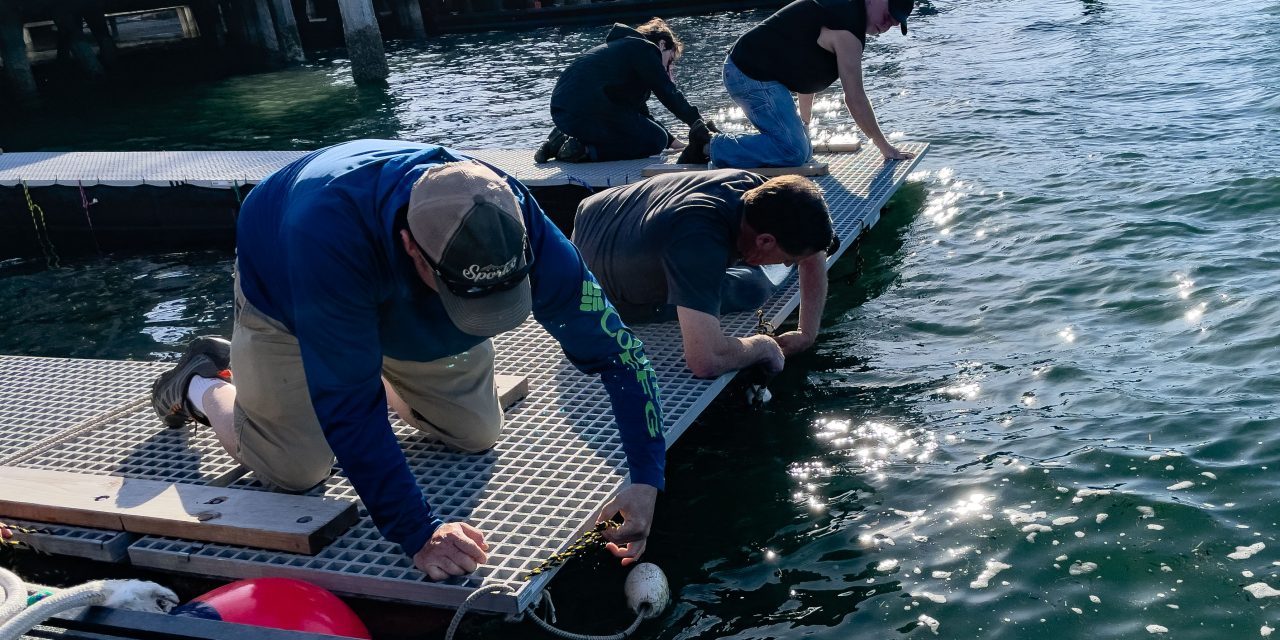 When 100,000 chinook salmon were freed from net pens at Point Defiance earlier this summer, it didn’t just mark the beginning of their potentially epic journey to the Pacific Ocean and back again. It also marked a milestone for the burgeoning partnership between the Puyallup Tribe and local schools, including Chief Leschi Schools and Tacoma Public Schools’ Science and Math Institute (SAMI).

The partnership allows students to raise, study—and eventually, release—salmon provided by the tribe and Washington State Department of Fish and Wildlife (WDFW). The students get experience caring for the fish; the tribe gets to build partnerships, grow scientific knowledge and kindle appreciation in younger people for caring for salmon.

“Collaboration is where it’s at for helping our salmon,” said Blake Smith, the Puyallup Tribe’s fisheries enhancement chief, who was among those present for the salmon’s release behind the Point Defiance Anthony’s restaurant.

At that release, he noted the fish have quadrupled in size as they were raised in the pens.

“Bigger fish have a better chance of survival,” he said.

It’s the fourth year of the partnership, but the first when salmon were released in the Point Defiance area, and the first when fish provided by WDFW were among those raised and released by SAMI students.

Chief Leschi students are also crucial to the partnership, traveling to the tribe’s Clarks Creek Hatchery and helping spawn the chinook that were eventually shipped to the Tacoma net pens.

Smith started the research and education program four years ago with Wayne Harmond, the founder of the nonprofit Northwest Salmon Research. Smith said the idea intrigued him from the start. There had been ideas floated previously about raising chinook in net pens but the projects had never materialized.

“We thought we could make it a little better for everyone, working together as co-managers,” Harmond said. “We all want to preserve the unique salmon culture.”

With the tribe providing the fish to be raised, other groups pitched in, including members of the Gig Harbor chapter of Northwest Anglers, who helped assemble and transport the nets.

The SAMI students’ involvement began as a club in the life sciences pathway, one of two offered at the school. Matthew Lonsdale, a marine science teacher, helped guide students as they helped with water quality testing and the fish’s feeding.

While helping to educate students is among the tribe’s goals, scientific benefits may also emerge. The tribe is eager to study whether chinook released directly into Puget Sound have a higher survival rate, perhaps because they can avoid predators, toxins and other pollutants found on their usual route to the sea.

“I thought it would be an excellent time to give it a go and see what happens when we release fish farther from Commencement Bay,” Smith said. “Maybe they’ll survive better. And we want to know what happens after. Do they come back to the hatchery?”

The released fish have coded-wire tags. One previously released fish, a jack, was recovered last year after returning earlier and smaller than the rest of its brood year, Smith said.

Volunteers release chinook from net pens at Point Defiance, a benchmark moment in the partnership between the Puyallup Tribe, WDFW and local students. Photo and story: Trevor Pyle