One of the major problems biologists see with flooding is what’s known as “scour.” High and often fast-moving water will “dig out all the eggs that were laid down,” said Marks, ruining chances for increased numbers of young fish. He noted that coho and chum salmon spawning “were more or less lost” during the recent flood.

Local scientists conduct their surveys by foot, with the exception of the Puyallup, White and Carbon rivers and South Prairie Creek, which are navigated by raft. Chum salmon spawning is winding down now, having hit its peak about a month ago. Steelhead season begins in mid-March and runs for roughly three months.

While the tribe knows the flooding has caused a significant loss in the fish population for the immediate future, it’s too early to find the impact farther down the road. Hatchery fish are generally in better shape than their counterparts in the wild.

“We really can’t make an estimate of how many offspring may have been lost from that event,” Marks said. “We know that the majority of the wild fish were lost. Our hatchery actually came through quite well.” 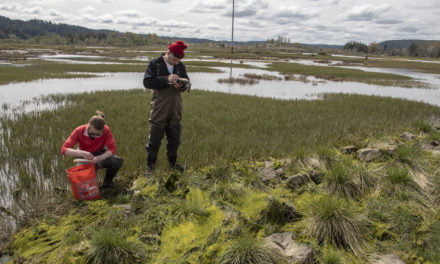