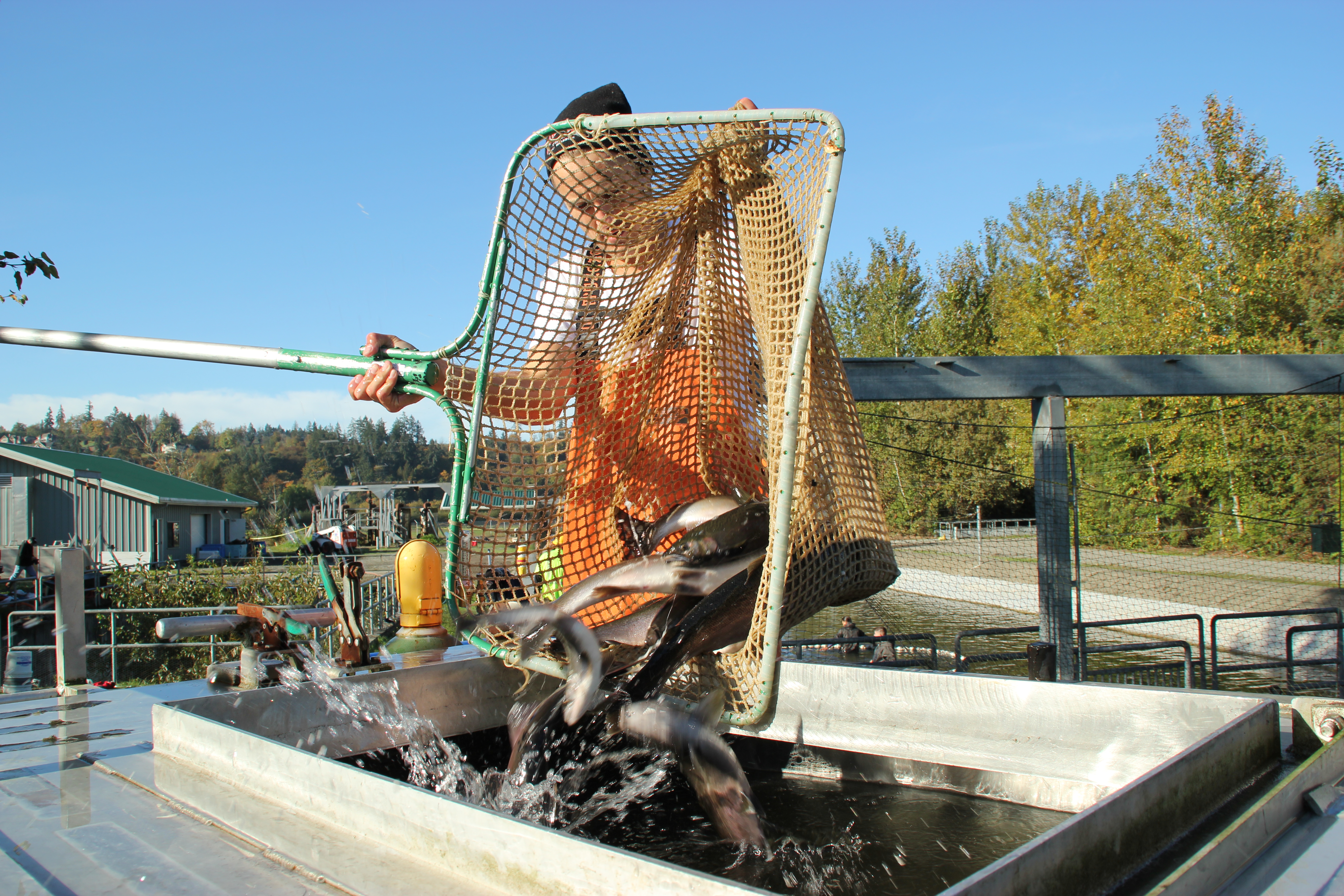 For the first time in decades an abundant coho run has re-established itself on Clarks Creek in the lower Puyallup River. The Puyallup Tribe is making sure that these returning adults are finding a place to spawn.

Tribal staff built an improvised fish slide at the Clarks Creek hatchery to move the thousands of coho that found their way into the hatchery pond upstream.

“We just starting seeing thousands and thousands of coho swimming into our ponds,” said Blake Smith, enhancement manager for the tribe. The tribe is moving the fish upstream because the tribe only spawns chinook salmon at their hatchery. The tribe uses a weir that blocks Clarks Creek to make sure all returning chinook make it into their ponds. The tribe releases about 1 million chinook from Clarks hatchery each year.

“So we put together a fish tote, a water pump and some extra pipe, and starting moving them upstream,” Smith said.

Three years ago the state began releasing coho from its Puyallup hatchery, upstream of the tribe’s hatchery. The state was able to release the coho from its hatchery because of a settlement between the tribe and the state Department of Transportation. “The state needed to do some work on the bridge over I-5, and as compensation for impacts on salmon, we insisted that they start releasing coho lower in the river,” Smith said.

The tribe is also taking advantage of the bumper crop of fish by putting hundreds of the coho into tanker trucks and seeding other nearby streams, where there might be better spawning habitat.

“We know juvenile coho are using these lower river tributaries to rear, but we don’t have much evidence of adult coho spawning here,” said Russ Ladley, resource protection manager for the tribe.

Because of urban development and the increase in impervious surface in the lower Puyallup River watershed, there isn’t a lot of suitable habitat for coho. This is particularly true since coho are dependent upon high quality habitat conditions for a full year or more, before leaving for the ocean.

“At the very least, if these fish don’t find habitat to spawn in, we know their carcasses will be eaten by aquatic insects that will in turn feed salmon from across the watershed that end up in these lower river tributaries,” Ladley said.