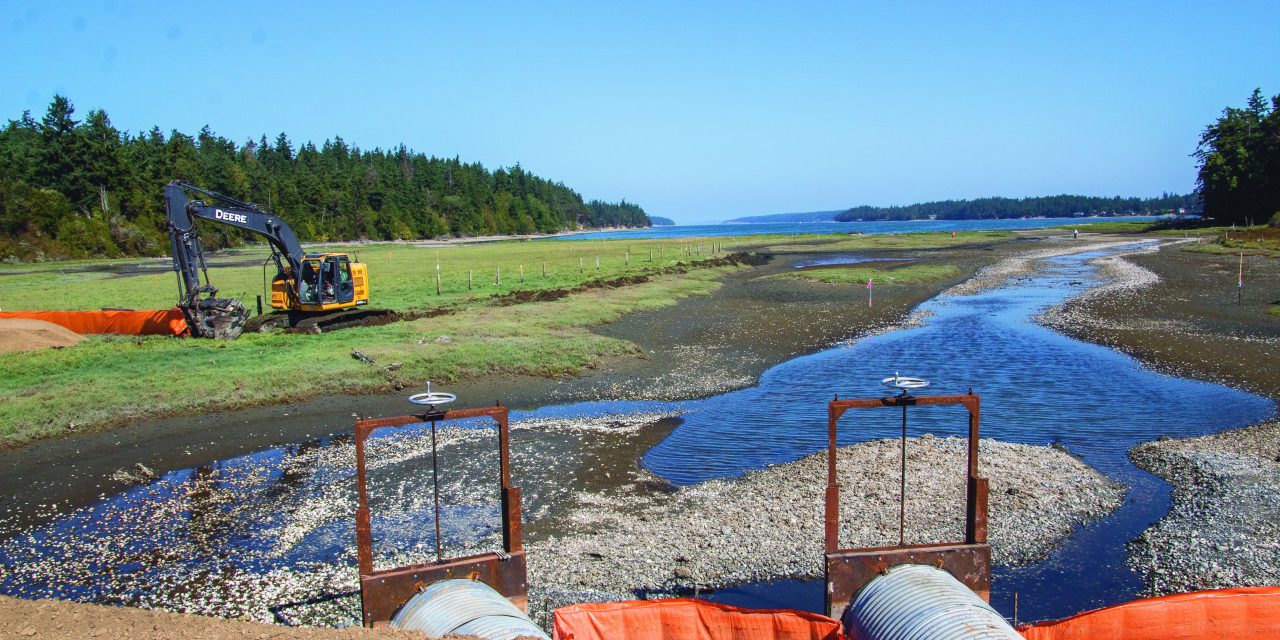 Since 1940, a causeway and two undersized culverts in the salt marsh between Kilisut and Oak harbors, near Marrowstone and Indian islands, have hindered salmon migration and restricted tidal flow.

From 2011-2014, the tribe conducted a multifaceted study of where and how juvenile salmon were using nearshore environments to spawn, rest and feed in Hood Canal and Admiralty Inlet.

Unexpectedly, juvenile salmon were found to be migrating away from large estuaries, like the Duckabush and Dosewallips, and into embayments such as Kilisut Harbor to hide, rest and feed, said Hans Daubenberger, the tribe’s senior research scientist.

“The data provided by the tribe from that study is responsible for helping make this project happen,” said Rebecca Benjamin, executive director of the North Olympic Salmon Coalition (NOSC), which is spearheading the project.

As a result, a 450-foot-long bridge will replace the causeway and undersized culverts. The work also will open up 2,300 acres of new salmon habitat, improving fish passage, water quality and tidal flow.

It is expected that Puget Sound and Strait of Georgia coho salmon, Puget Sound chinook and steelhead, Hood Canal summer chum, and forage fish and shellfish will benefit from the new habitat.

The push for this restoration also came from longtime Marrowstone Island residents who have seen the bay change for the worse because of restricted flow through the causeway. Aside from the roadway, the harbor has been relatively undisturbed, with minimally developed adjacent shorelines from the U.S. Navy Base on Indian Island and nearby Indian Island County Park.

Channel grading on both sides of the causeway and construction of the bridge abutments and foundation started this summer. Bridge work will continue through the winter as weather allows, and the culverts will be taken out next summer, with an expected completion date of fall 2020.

Justin Taylor: “He was a good friend of the tribe”