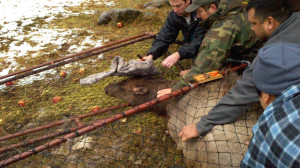 Point Elliott Treaty tribes are using a safer, less-expensive method of collaring and tracking elk in the Nooksack herd.

Tribal and state wildlife co-managers monitor the Nooksack herd via helicopter surveys. In the past, animals were fitted with tracking collars after being tranquilized by aerial darts. However, helicopter time is expensive and aerial darting poses a safety risk.

This winter, staff from the Sauk-Suiattle, Swinomish and Upper Skagit tribes, and the state Department of Fish and Wildlife baited elk at various sites in the North Cascades Mountains. When remote cameras showed heavy elk use in one of the areas, technicians set a trap to capture a cow elk.

“We choose cows because we want collars on animals that will be out there a long time due to a closed cow hunting season,” Madsen said. “When we do surveys, we’re looking for herds.”

Tribal and state co-managers collared and relocated about 100 cow elk from the Mount St. Helens region in 2003 and 2005. The batteries in those collars are reaching the end of their lifespans, which is one of the reasons for the increased effort to collar more animals.

The on-the-ground trapping method allows the tribes to seek out elk subgroups that don’t already include a collared animal, said Todd Wilbur, Swinomish tribal member and chairman of the Inter-tribal Wildlife Committee.

“We need a certain number of active collars to keep the population model active,” he added.

The tribal and state co-managers have worked for years to recover the dwindling elk population in the North Cascades Mountains. Twenty years ago, the Nooksack elk population was about 1,700 elk. By 2003, the herd had declined to about 300 elk, largely because of degraded and disconnected habitat.

Tribal and state wildlife managers agreed to stop hunting the herd in the 1990s, because of the population decline. One of the strongest signs that recovery efforts were working came in 2007, when tribal and state wildlife co-managers determined that the Nooksack herd was stable enough to support a small hunt of 30 elk. Limited hunts have taken place each year since then.

More, but still not enough on fixing fish blocking culverts