WESTPORT–In the past, the Quinault Indian Nation had only occasional glimpses into the health of the vast ocean that is their traditional fishing area, stretching about 50 miles from Grays Harbor north to Destruction Island.

But this summer, thanks to a computer-directed underwater research glider that looks like a motorcycle-sized torpedo with wings, QIN was able to gather four weeks of comprehensive data throughout their fishing area.

The Center for Coastal Margin Observation & Prediction (CMOP), worked with QIN marine scientist Joe Schumacker to plan a data gathering project for the glider named Phoebe. “This mission provides us with important information about the Quinault traditional ocean waters that would be cost-prohibitive to obtain otherwise,” said Schumacker.

The glider, deployed and recovered by a QIN fishing vessel, gathered salinity, dissolved oxygen, fluorescence and temperatures at different depths, then transmitted the newly-collected data to CMOP.

QIN is particularly interested in dissolved oxygen levels after an episode of low oxygen left hundreds of normally bottom-dwelling creatures on the nation’s beaches in 2006. Tribal Dungeness crab fishermen were bringing up pots that were either empty or full of dead crab.

“We’re still looking at the results from the glider’s mission,” said Schumacker. “We’re excited to get this kind of information, particularly over Quinault Canyon, which features prominently in the upwelling that feeds marine life in our area comes from.” Nutrient-rich but oxygen-poor water wells up from the depths and feeds marine life. Natural mixing of the water column is important to offset the negative effects of the deep water’s low oxygen levels. The glider mission will help QIN understand where lower oxygen levels occur and if there are any hints of possible fish kills in the offing.

“Up until now, the only similar information we can get is from one seasonal buoy in this area and that is just a snapshot of the water quality in that one specific area,” said Schumacker. “Phoebe gives us a look at a large piece of the ocean that we really have not had the ability to examine before.”

QIN wants to deploy sensors that would give early warning of where low-oxygen fish-kills may occur and hopes to conduct more data-gathering missions with Phoebe. “This shows what we can do when we’re involved in the process,” said Ed Johnstone, fisheries policy representative for QIN. “It’s not a substitute for a holistic approach to research needs off our coast, but it’s timely information we can use.” 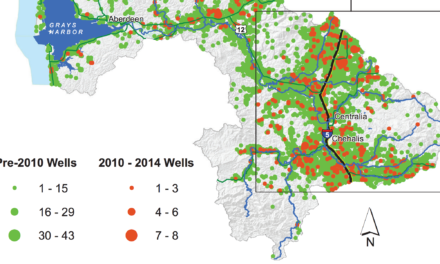