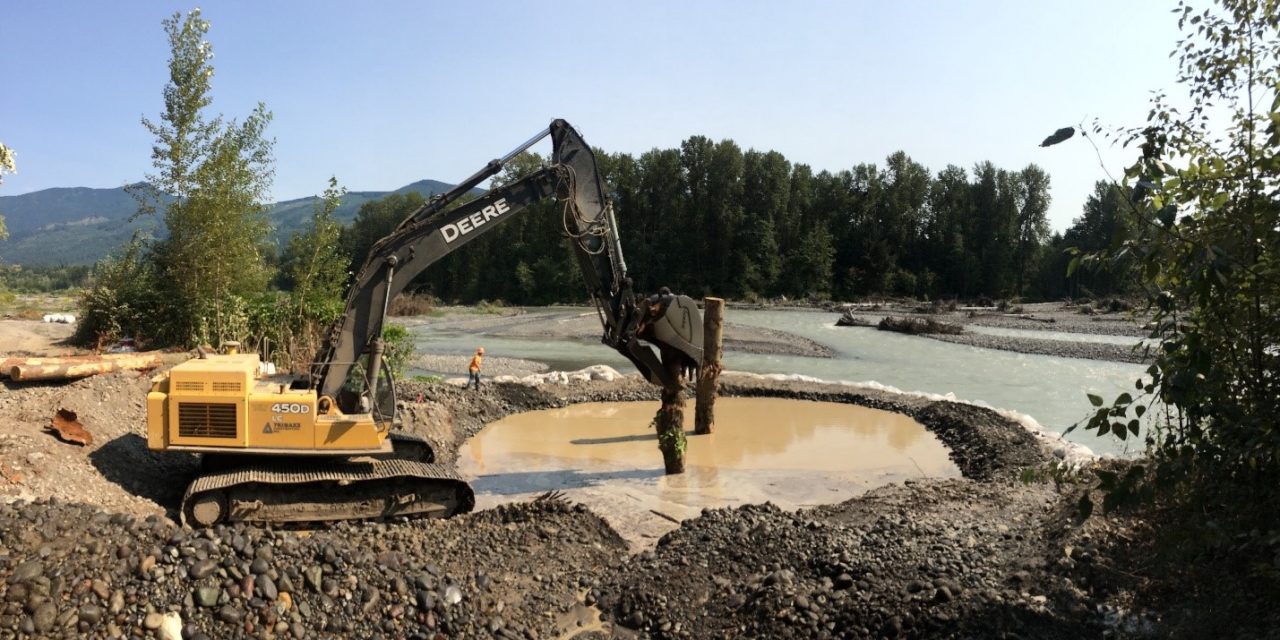 A large salmon restoration project on the North Fork Nooksack River is nearing completion as the Nooksack Tribe plans to install 50 logjams in a mile-long stretch of the river near Kendall.

The project is the fourth and final phase of restoration in the North Fork Nooksack’s Farmhouse Reach, where channel instability and a lack of large wood in the river have limited salmon recovery. The area is upstream from the state’s Kendall Creek Hatchery, which runs a supplementation program to help recover the native chinook population.

Salmon need stable spawning areas where their eggs can survive the high flows of fall and winter. Engineered logjams placed in the channel and across the floodplain help form and protect side channels that provide stable spawning habitat. Logjams also form pools and increase channel complexity, benefiting adult and juvenile chinook and other salmon species.

The tribe has done similar work elsewhere on the Nooksack River, where benefits were seen shortly after the restoration.

The lack of channel stability in the North Fork Nooksack River has been attributed to wood removal, forest clearing and increased flooding. The tribe has been placing logjams to stabilize and restore habitat in the North Fork almost every year since 2008.

“The restoration approach is to restore the large stable logjams that historically formed and maintained forested islands, floodplain and associated side channels, while planting suitable areas to restore floodplain forest,” said Treva Coe, who manages the tribe’s habitat program.

North and Middle Fork Nooksack early chinook are a genetically unique population with low returning numbers of natural-origin, or native, fish. The Farmhouse Reach once was one of the most active spawning areas in the North Fork, but degraded habitat has diminished the salmon runs. The Nooksack Tribe hasn’t had a directed commercial fishery on early chinook in the Nooksack River since about 1980.

“This project is essentially the meat in the sandwich for restoration of the Farmhouse Reach, filling the gap between previous phases both upstream and downstream,” said Lindsie Fratus-Thomas, who will be managing the project and overseeing construction, as she has for previous phases. “This habitat restoration project is an important step toward recovery of chinook in the North Fork Nooksack.”

Behind the Scenes: Tribe’s River Restoration Crew Gets the Job Done