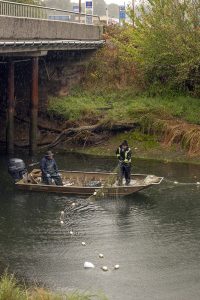 Nisqually tribal fishermen Joseph Squally (standing) and grandfather Albert “Chief” Squally work to repair Joseph’s net on McAllister Creek during the chinook fishery. The tribe returned the run to McAllister Creek after a 25-year absence following the closure of a state hatchery.

After a 25-year absence, tribal and non-tribal fishermen can again harvest chinook in McAllister Creek, thanks to the Nisqually Tribe.

The headwaters of McAllister Creek, known historically to the tribe as Medicine Springs, were transferred back to the tribe in 2016, from the city of Olympia after decades of work by tribal and city staff. The mouth of Medicine Springs Creek is the site where the Treaty of Medicine Creek was signed in 1854. Today it’s part of the Billy Frank Jr. Nisqually Wildlife Refuge.

The Washington state Department of Fish and Wildlife closed its hatchery in McAllister Creek in the mid-1990s, ending fishing opportunity there.

Each year since 2016, Nisqually has transported up to 1 million chinook smolts to the springs from its Clear Creek Hatchery. They are held in a pond in Medicine Springs for several weeks before being released.
These hatchery fish already are providing a much-needed tribal fishing opportunity in the Nisqually watershed, where Nisqually River fisheries often are closed to allow weak salmon runs to recover. “There are 2, 3 and 4-year old chinook returning to McAllister Creek this year,” said Bill St. Jean, Enhancement Program Manager for the Nisqually Tribe. “Access is a little tough for sport fishermen, but the guys getting under the bridge there are successful pretty quickly,” said St. Jean. Other fishermen are taking small boats out to the mouth of the creek, catching bright, shiny chinook up to 25 pounds.

The tribe is involved in a number of efforts to restore and protect habitat in the ocean, Puget Sound and the river delta to improve the health and long-term returns of these salmon. Partners include Nisqually River Council, Nisqually Land Trust, city of Tacoma, city of Centralia, Eatonville, the Salmon Recovery Funding Board, Washington Department of Fish and Wildlife, South Puget Sound Salmon Enhancement Group and others.

The Nisqually Tribe operates two hatchery facilities in the Nisqually River in addition to the rear and release site at McAllister Springs. The hatchery programs use the best available science and are a critical part of the recovery efforts for the Puget Sound Fall Chinook Evolutionary Significant Unit, which includes all Washington chinook salmon populations from South Sound to the Elwha River on the Olympic Peninsula to the Nooksack River to the north, all of Puget Sound and Hood Canal to the south.

Salmon are culturally and economically important to tribal members who fought for the treaty-reserved right to fish during the Fish Wars, which led to the 1974 Boldt decision affirming those rights, and was later upheld by the U.S. Supreme Court.