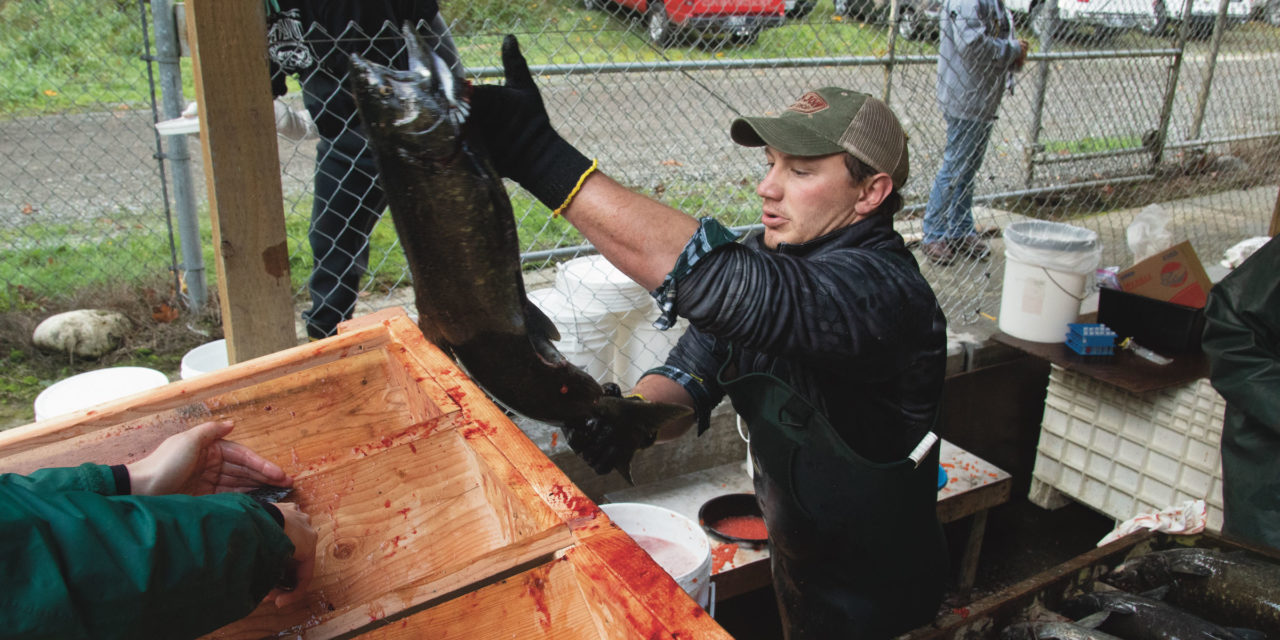 The Nisqually Tribe is changing how it spawns hatchery chinook in an effort to give orcas a more nutritious meal.

“Puget Sound hatchery chinook have been getting smaller and smaller for decades,” said David Troutt, natural resources director for the Nisqually Tribe.

The number of southern resident orcas has declined from nearly 100 to 74 in the last 20 years in part because they aren’t getting enough chinook, their preferred food. The orcas and chinook are both listed as threatened under the federal Endangered Species Act.

“We need to restore chinook, not just as a food source for orcas, but because they are central to the way of life of the Nisqually Tribe,” Troutt said. “One thing we’re also trying is to make each chinook salmon more nutritious.”

Instead of mixing eggs and sperm from chinook of various sizes, staff at one of the tribe’s hatcheries spawned only large chinook with other large chinook. This year, tribal staff spawned all of the chinook at Kalama Creek, creating a large chinook and small chinook group. In future years, they plan to spawn only the larger returning chinook.

“Over time, we hope to see larger chinook coming from those larger parents,” Troutt said.

No one knows why chinook salmon have been coming back smaller. But the key might be in how salmon choose partners in the wild.

“We don’t consciously pay attention to their size when we spawn chinook in the hatchery,” Troutt said. “There is some evidence that in the wild larger chinook will seek each other out. So, the broad mixing of chinook of various sizes in the hatchery could mean that fish with smaller genes are being spawned with larger fish more than they would in the wild.”

The tribe will implant a coded-wire tag in each large chinook, so when they come back, they will be identified as descendants from the group. Tribal staff also are taking genetic samples so they can track the project over multiple generations.

“The Nisqually Tribe continues to use the best available science to ensure chinook both for our future and the orca’s,” said Nisqually Chairman Ken Choke. “Our tribe and tribal council make these investments in our future that benefit everyone.”

“This will be a long-term experiment to see if we can reverse this trend of smaller chinook,” Troutt said.

“We can totally restore the Nisqually watershed, but these fish still face a lot of hurdles once they enter Puget Sound,” Troutt said. “We’re still losing habitat faster than we can restore or protect it.”