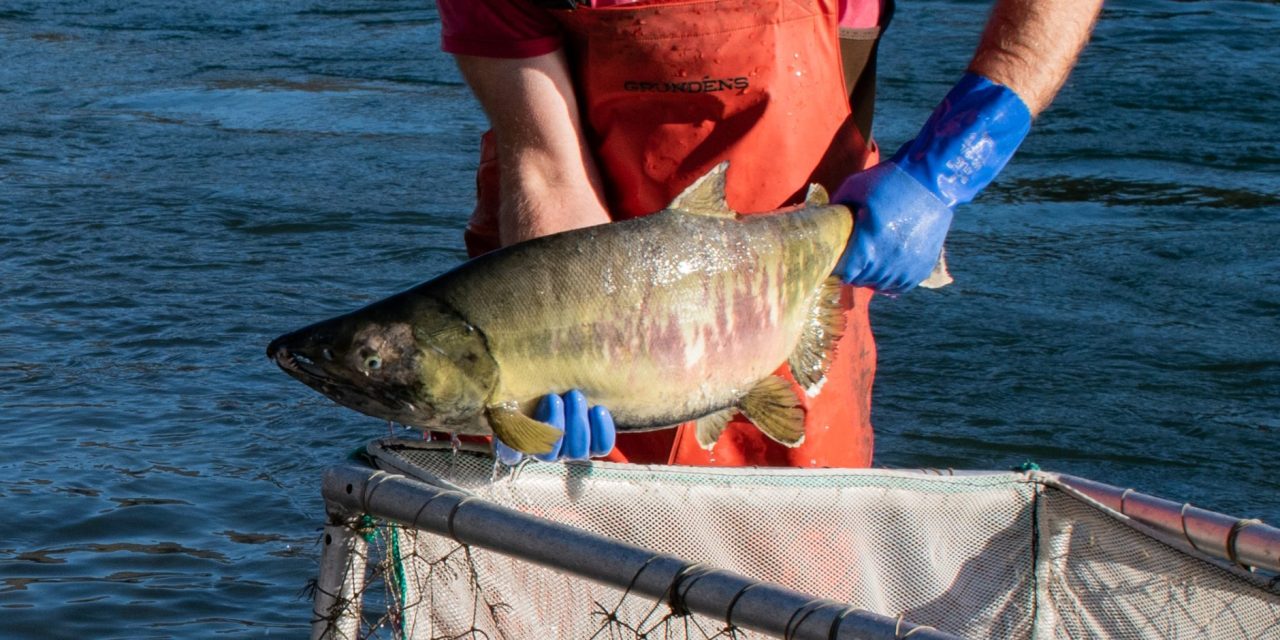 Water sloshed from the back of a truck as it made its way from the confluence of Sutter Creek and the Skagit River to the Marblemount Fish Hatchery upriver. At its destination, the cargo inside—a swirling mass of fins and tails—cascaded into the hatchery’s protected waters.

About 130 adult fish were trucked from river to raceway that day as part of a new Skagit River chum hatchery program the Upper Skagit Indian Tribe is helping to get off the ground.

Chum salmon historically sustained Upper Skagit ancestors through winter, as the last fishery of the year. The number of chum returning to the river to spawn sharply declined in the early– to mid–2000s. Despite the closure of all treaty and nontribal fishing since 2007, Skagit River chum have continued to return in low numbers.

The new hatchery program is co-managed by the Skagit River treaty tribes—Upper Skagit along with the Sauk-Suiattle Indian Tribe and Swinomish Indian Tribal Community—and the Washington Department of Fish and Wildlife (WDFW).

“With the decline of Skagit River chum salmon we wanted to provide a boost to the naturally spawning population,” the tribe’s harvest management biologist Bob McClure said.

The partners are collecting adult chum, also called dog salmon—in part because of the long teeth developed by spawning males—as broodstock to spawn at the hatchery. They will then rear the offspring until the fish are ready to be released into the river. 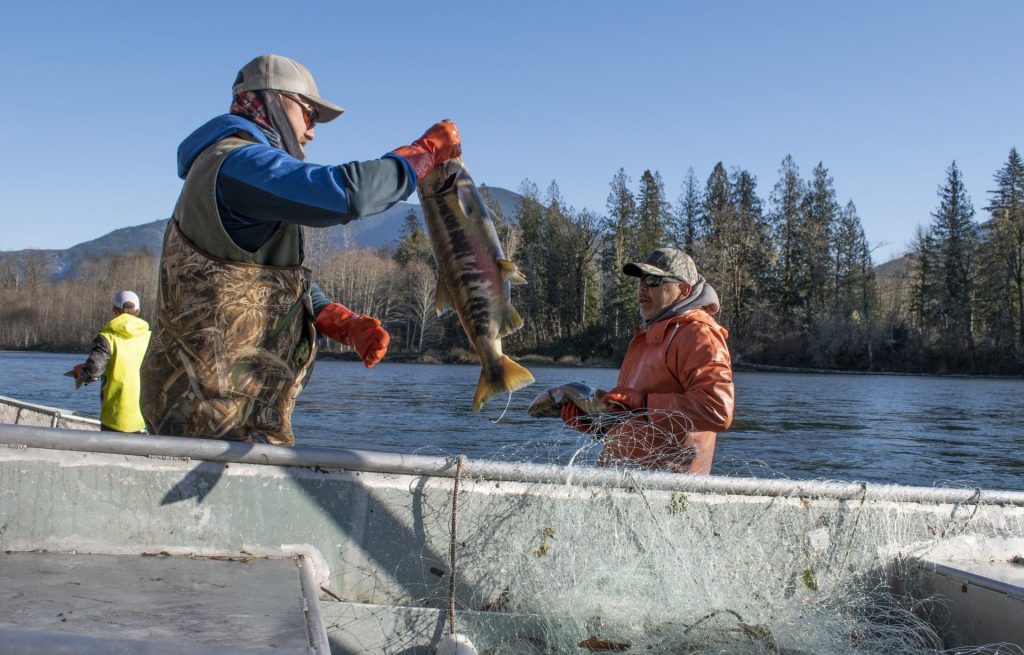 Josh Adams (left) of WDFW and Larry Peterson (right) of the tribe’s natural resources department untangle chum from a net during broodstock collection.

“The Upper Skagit’s goal is to see the dog salmon return to its historical place of significance in our culture,” tribal elder and natural resources director Scott Schuyler said.

Hatchery programs can be essential when, despite harvest restrictions, populations don’t recover on their own.

Hatcheries circumvent many threats to salmon in the wild, including flooding that can damage fertilized eggs and predators that eat small fish. And the more young fish that leave the river for their journey to sea, the more are likely to escape ocean fisheries and predators and complete the journey back.

The new hatchery program is underway thanks to federal funding and approval of a Hatchery Genetic Management Plan (HGMP) required under the Endangered Species Act to ensure the program would not harm ESA-listed chinook and steelhead populations that share habitat with Skagit River chum.

From October through December, a team from the Upper Skagit Natural Resources Department and WDFW fished a section of the river between Rockport and Marblemount, sorted fish by sex, and hauled them one at a time from the water’s edge to their special cargo hold.

Before federal funding was available, Upper Skagit and the Skagit River System Cooperative (SRSC), the natural resources consortium of the Swinomish and Sauk-Suiattle tribes, provided broodstock to the hatchery program at a smaller scale. Through their self-funded efforts, the tribes caught 280 chum for WDFW’s Marblemount Fish Hatchery in 2020 and 137 chum in 2021.

The goal now is to provide the federally approved hatchery program up to 500 fish in odd numbered years and up to 1,600 fish in even numbered years, in accordance with fluctuating run sizes. The tribe is catching the fish and WDFW is delivering them to the hatchery facility where state agency staff will spawn, incubate, raise and release the chum as they grow.

As of the start of December, the tribe had provided 913 chum for the program this year. 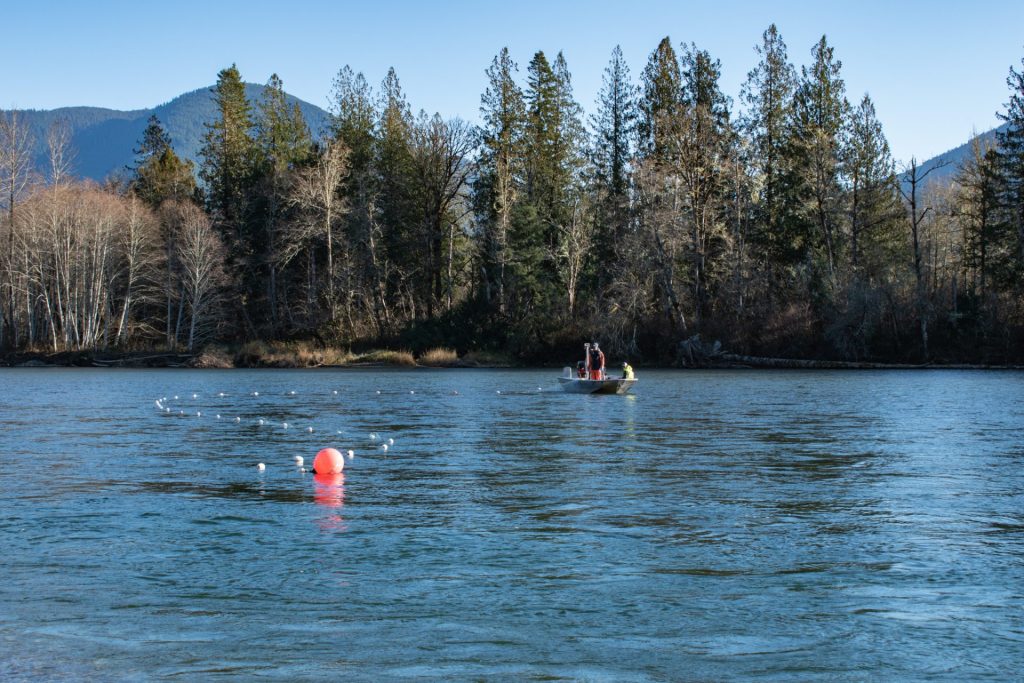 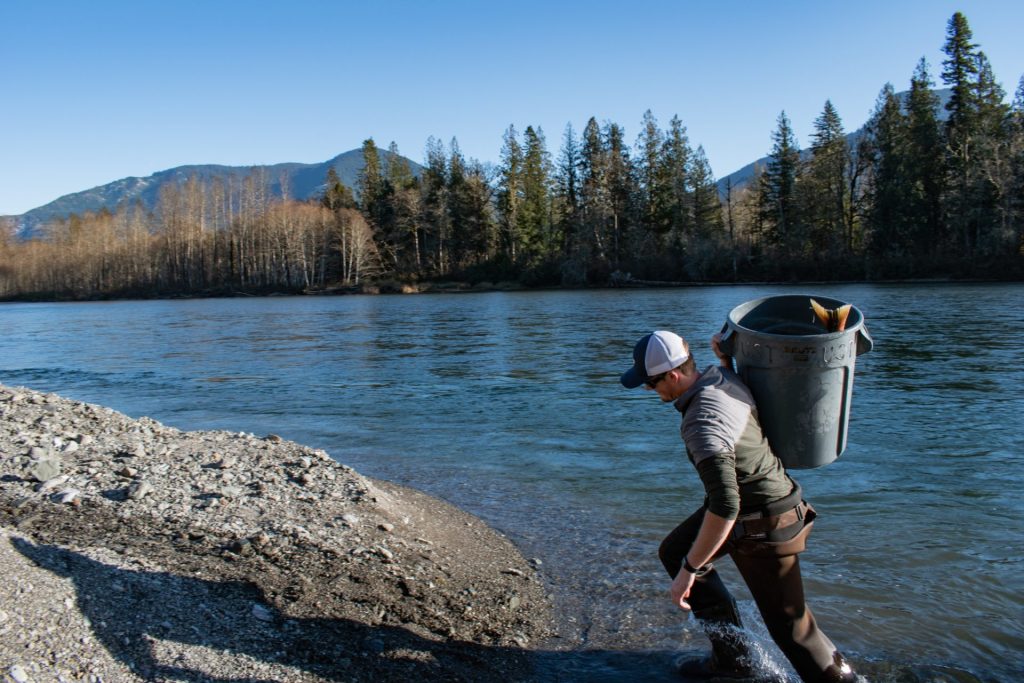 At top: A chum salmon is lifted from a holding pen in the Skagit River during hatchery broodstock collection in November. Above, from left to right: Staff from the Upper Skagit Tribe’s natural resources department deploy a net on the Skagit River during chum broodstock collection. Chris Kohn, field biologist for the tribe, hauls a chum from the river to a WDFW truck for delivery to the Marblemount Fish Hatchery. Photos and story: Kimberly Cauvel